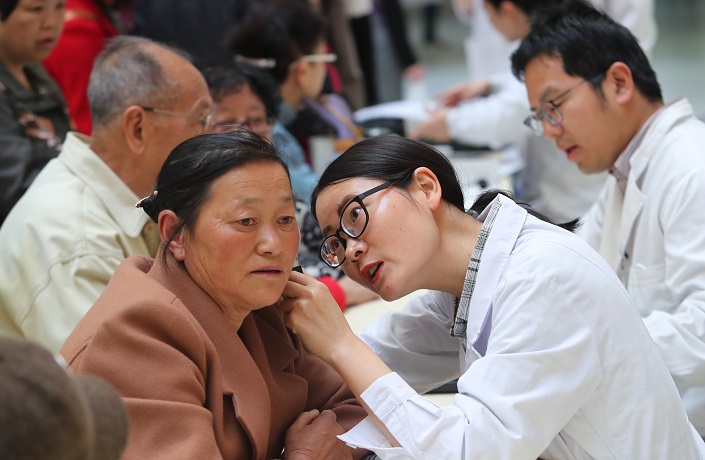 A patient receives a hearing test at a hospital in Kunming, Yunnan Province, on March 3, 2019. Photo: IC

Suqian in Jiangsu province and Luoyang in Henan were previously considered the best examples of market-oriented reform of public hospitals in China.

But the local governments of both places recently took steps to reverse the process after years of mixed results and failed transformations. In January, the two cities’ governments almost simultaneously announced plans to regain control of the local hospital systems through “new construction” and “reacquisition.”

The moves are a far cry from the optimism of February 2010 — the high point for the market-reform experiment. That month, a group of ministries including the former Ministry of Health jointly launched hospital reform pilot programs in 16 cities including Kunming and Luoyang. Hospitals were urged to make “in-depth exploration and bold trials” to “strive for breakthroughs.”

It was one of many solutions China has attempted to apply to its fractured and troubled public hospital system, which has seen an exodus of young doctors over the past 15 years and high drug prices that make many treatments inaccessible to ordinary patients.

Over time, the experiments seemed to show that China’s health-care industry is as ill-suited to reforms driven by market forces as the American medical system. By 2016, the reform initiative lost the backing of central government authorities.

Suqian’s reform had resulted in a brain drain from the city, and investment in hospitals had dried up after the initial phase. Meanwhile in Luoyang, introducing employee ownership failed to create incentives for greater efficiencies, and corruption charges against a hospital director scuttled one deal. In Kunming, Yunnan province, hospital restructuring led by the architect of the Suqian medical overhaul collapsed when the official came under investigation for corruption.

In 2011, the “Luoyang Model,” with employee stock ownership at its core, was born. Faced with insufficient public funds and widespread losses in a public hospital system that depended on drug rebates for income, the local government pushed 14 public hospitals to transform into private, employee-owned, nonprofit hospitals.

Meanwhile, Suqian had been privatizing public hospitals since 2000 under the leadership of Qiu He, a man who rose through the ranks of local government to become mayor and then party secretary of Suqian. All 125 township-level public health centers and 10 county-level public hospitals were included in the program.

In 2008, Qiu joined the local government in Kunming, where he led the restructuring and partial privatization of three public hospitals. CR Medical, a unit of state-owned conglomerate China Resources, was brought in to lead the restructuring of Kunming Children’s Hospital in 2012. CR Medical currently holds a 66% stake in Kunming Children’s Hospital, having invested 76 million yuan.

In Luoyang, the initial plan was to transform hospitals in two phases. The first phase involved turning public hospitals into joint-stock, nonprofit companies owned by employees. After a two- to three-year transition period, the second step would be to introduce outside capital, with “high-end expert resources, mature management models and sufficient capital,” or to integrate the hospital into a “national or province-level medical institution.”

But, ultimately, Luoyang’s public hospitals failed to make it into the second phase. In mid-2017, the Luoyang Women’s and Children’s Healthcare Center came close. It reached the negotiation stage of a potential share sale with private equity firm CDH Investments, when Wang Maoshuai, the hospital’s director at the time, was placed under investigation on suspicion of embezzlement and bribery, shutting down the deal entirely.

Implementing the first phase alone was a bumpy process. Employee stock ownership, which gave 51% of the shares in each hospital to management and 49% to ordinary staff, “did not change much in many of the hospitals, and the transitional program struggled to mobilize the enthusiasm of the employees,” the president of one Luoyang hospital told Caixin.

After the restructuring, no bonuses were awarded, and there was no clear correlation between working harder and gains in employees’ salaries, while retired employees were unsure how they should cash in their shares, he said. A lack of personnel training remained a major problem, he said.

In Kunming, the CR Medical-led experiment was not faring any better. Qiu He, who by 2015 was deputy secretary in the Yunnan province party committee, was placed under investigation that March for suspected “serious violations of discipline and law” — an official euphemism for corruption — and the restructuring of Kunming’s hospitals itself came under suspicion. Tightened policy following the investigation resulted in Kunming Children’s Hospital being left out of CR Medical’s back-door listing on the Hong Kong stock exchange in August 2016.

“You can’t base your investment behavior on one leader alone, or else you’ll easily get into trouble,” one person close to the transaction told Caixin.

In Suqian, most of the hospitals involved in the reform effort were purchased by individuals involved in the local medical system, and suffered from problems like “a lack of new talent and academic training mechanisms,” the president of one Suqian hospital told Caixin.

In May 2015, China’s State Council issued a guidance document that called for local governments to “break the profit-seeking mechanism of public hospitals.” But market reform in public hospitals continued to push forward until August 2016, when the National Health Conference required local governments to avoid “shirking the burden” of their healthcare responsibilities.

The previously finalized 93 million yuan purchase of the Sixth People’s Hospital of Luoyang by Shenzhen-listed Lepu Medical Technology Co., Ltd, which had been announced in February 2016, was immediately reversed. At the same time, the purchase of Luoyang No. 5111 Hospital by private medical organization Sanbo Sciences Institute also hit a roadblock when the local government informed the hospital it was not allowed to strike deals with companies that weren’t wholly owned subsidiaries of the municipal State-owned Assets Supervision and Administration Commission.

Since then, there have been virtually no transactions involving hospitals in Luoyang.

The municipal government created a “deadlock” for hospitals and potential investors, an investor told Caixin. Nonprofit hospitals aren’t allowed to take part in transactions unless the government is given a seat on the board with veto power.

“Capital now has no way at all to participate,” the investor said.

Meanwhile, the Luoyang government has moved toward buying back privatized public hospitals — but compensation is a contentious issue. The government says it will pay “1.2 times the benchmark interest rate of bank loans … based on the amount of funds transferred to the hospital and the actual investment time.”

But hospitals and employees have challenged the government’s offer, which some hospital executives argued hurts employee shareholders’ interests, according to the director of one hospital in Luoyang.

Nevertheless, “it’s difficult for the government to pay more,” one city official told Caixin. He said that if the equity were recovered at a high price, the city government could face accusations having sold off state-owned assets for too little money when restructuring began.

But it’s not game-over for investors hoping to enter China’s public hospital system. As China pushes into its latest round of health-care reform, government documents including an action plan released by the powerful National Development and Reform Commission in February suggested that private capital could play a growing role in three main areas — hospitals run by state-owned enterprises, specialized services and elder care.

“China’s basic medical care is weak, and there aren’t enough resources in the field of public health to be converted into for-profit medical institutions,” Fang Laiying, vice president of the China Hospital Association, told Caixin. “But social capital can still do a lot in the fields of specialized care, elder care, and so on.”