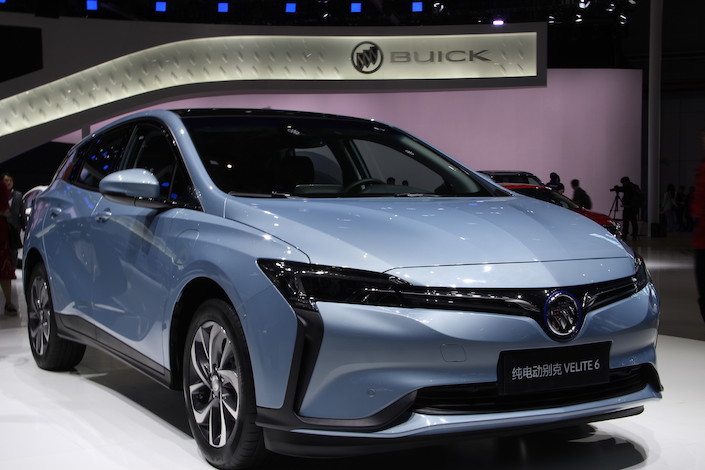 It may have a stodgy image in the U.S., but that isn’t stopping General Motors’ Buick nameplate from making a stylish splash for its first electric vehicle (EV) offering in China, where the brand enjoys a much yuppier image.

The brand that many Americans associate with old folks cruising down country roads was showing off its Velite 6 sedan this week in Shanghai at China’s largest auto show, to coincide with the model’s formal launch in the country.

The cars will carry a relatively affordable price tag of 203,800 yuan ($30,400) to 223,800 yuan, and that could be reduced to as little as the equivalent of $25,000 after taking advantage of government rebates, Buick sales chief Bao Ye told Caixin at the show. But the generosity of those rebates could be relatively short-lived, as many local and national incentives are set to end or be sharply reduced at the end of June.

China is leaning heavily on the accelerator in its bid to promote new-energy cars, part of a two-pronged campaign to clean up the country’s polluted air and also develop cutting-edge technologies that can be exported. But having fed generous subsidies to manufacturers and buyers over the last few years, Beijing is now scaling back many of those incentives to make the industry self-sufficient.

GM and others are also coming under pressure as Beijing gets set to roll out a program that will require all sellers of traditional gas-powered vehicles to get certain percentages of their sales from new-energy models or face penalties. In anticipation of the quotas, most of the big global automakers have already set up joint ventures over the last two years to produce such vehicles in China.

As to Buick, the brand has said it plans to roll out 20 new-energy car models in China by 2023, including both EVs and hybrids. In terms of range, the Velite 6 falls in the middle of the pack, with about 300 kilometers (187 miles) per charge, positioning it as a good car for city use, Bao said.