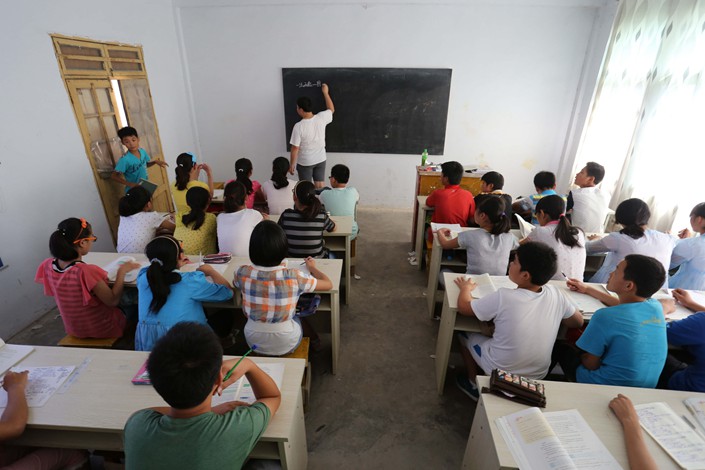 “The fundraising amount is one of biggest in history for educational firms who provide services for corporate clients in the field of K12 education,” founder and CEO Xu Jicheng said in a statement on Thursday. Gaosi did not reveal its current valuation after the investment. Its last fundraising effort in 2017 put the company’s market value at 4 billion yuan ($596 million).

Founded in 2009, Gaosi started out as an operator of extracurricular education centers for primary and middle-school students. In 2014, it shifted its focus toward providing products and services to other extracurricular centers, especially in smaller cities.

Xu promised in the statement that Gaosi would not compete directly with schools outside its hometown, saying the company “will not open any teaching centers outside Beijing” but will instead develop its role as a service provider.

The money raised in the latest round will mostly be spent on product research and development, as well as to cover technological expenses in its “Online Merge Offline” strategy. The company also announced a strategic partnership with Tencent Holdings Ltd.’s cloud computing unit to develop technologies for the education sector.

Prior to the funding announced on Thursday, Gaosi has gone through three rounds of investment worth around $180 million and involving investors including China International Capital Corp. Ltd. and former Google China head Kai-Fu Lee’s Sinovation Ventures.

“K12 extracurricular tutoring in China is a promising field that has the potential to grow into a trillion-yuan market,” said Gordon Ding, managing director at Warburg Pincus who specializes in tech-related investments. The field is one of the investment firm’s long-term focuses, said Ding.

Online education is booming in China. The country is generally seen as fertile ground for both traditional and after-school education services due to parents’ willingness to spend lavishly on their children’s schooling. But the sector is also a sensitive one in China, amid growing calls to ease the burden on children who often get forced to take numerous extracurricular classes by parents anxious to see them succeed.

Many worry that recent signals from Beijing could augur new growing pains for the sector, whose growth has recently accelerated with the popularization of online learning.

Nearly all of the education companies that have listed in New York and Hong Kong over the last two years are now down sharply from their initial public offering prices. The biggest losers include RYB Education and Sunlands, which are all down by 60% or more from their listing prices. Rise Education and OneSmart are doing relatively better, but are still down more than 20% from their New York listings prices in 2017 and 2018, respectively.