Reporter’s Notebook: The Town Built on the Backs of Child Models 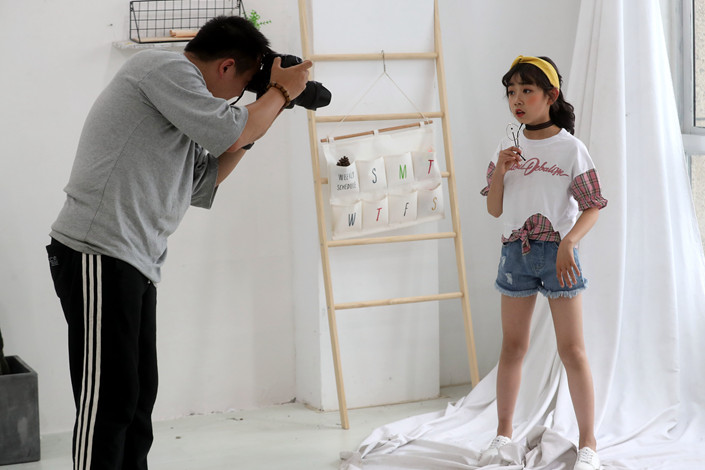 A girl practices getting her photo taken at a training center for children’s clothing models in East China’s Zhejiang province in April 2018. Photo: IC

The Six Degrees Photography Base in Huzhou, Zhejiang province, is an uncanny place.

The 6,000-square-meter (64,500-square-foot) facility, located in the town of Zhili in Huzhou, is a patchwork of pastiche because photoshoots fuel Zhili’s main industry: children’s fashion.

Zhili gained national attention after a video showing a 3-year-old child model named Niuniu being kicked by her mother circulated online. The video prompted 110 stores on Alibaba Group Holding Ltd.’s Taobao e-commerce platform to issue a statement condemning the use of images that harm the interests of child models, while one Weibo user claiming to be Niuniu’s mother has issued an apology amid online criticism of the child modeling industry.

China’s market for children’s apparel has grown rapidly since it emerged in the 1990s, with the mainland market’s value reaching 179.6 billion yuan in 2017, according to data cited in a Hong Kong Trade Development Council report.

Zhili emerged as a textiles hub in the 1980s as reforms prompted a manufacturing boom in eastern China’s Zhejiang and Jiangsu provinces. As the children’s clothing market took off, merchants from around the country poured into Zhili to place orders with wholesalers. Many local businesses are vertically integrated — literally. Wholesale showrooms and workshops are housed in the same buildings, taking up the first and second floors, while workers’ dormitories are on the top floor.

With the rise of e-commerce, middlemen have increasingly been cut out of the process, while manufacturers eager to attract online buyers have become more reliant on images of immaculately groomed children modeling the latest fashions to boost sales.

At Zhili’s “Number One Base” for children’s fashion photography one Tuesday, Caixin reporters saw cars dropping off children accompanied by parents lugging suitcases throughout the day. One child, dressed in a short-sleeved yellow shirt, walked down a purpose-built catwalk while a photographer, who had to crouch to capture the diminutive model, yelled instructions.

To be an e-commerce model, a child must have “thick eyebrows and big eyes,” and an appearance that is “yangqi,” a term that’s usually interchangeable with “stylish,” but which literally means “with an air of Westernness.”

A “mixed-race face” can be a child model’s greatest asset, according to a video by Shanghai Media Group-owned online platform Kankanews. A casual search on Taobao reveals that pale skin is also a prerequisite for models.

A woman leading two children who looked to be under the age of 5 into the compound said she was there to “help a friend” and “shoot a few garments,” but denied her children were professional models. At another facility, Caixin received a similar response from a photography crew: “It’s not child modeling, it’s just for fun.”

But child modeling can be lucrative, industry sources told Caixin. Regular models are paid by the item of clothing, with the rate ranging from dozens of yuan to over 100 yuan, while “elite” child models are hired at a daily rate of no less than 2,000 yuan.

Focusing on children’s fashion also appears to have paid off for Zhili, where Caixin saw many residential and commercial developments under construction on streets dotted with textiles and garment stores. The streets were congested even past 10 p.m., with electric cycle rickshaw bearing reams of fabric stuck in traffic alongside executives in foreign luxury cars.