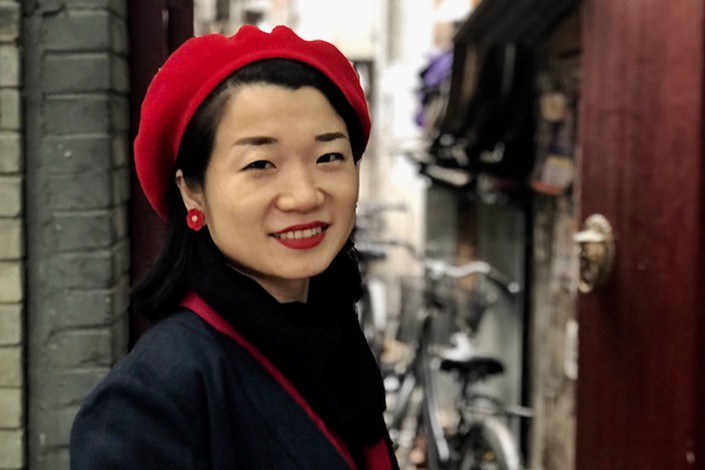 Many of the books we read about China in English are written by outsiders — foreign journalists and writers who write about China, after living here for a few years. Writer Karoline Kan takes inspiration from these. But she also shifts the perspective in her newly released book, “Under Red Skies: Three Generations of Life, Loss, and Hope in China.”

Born and raised in a small town near the northern port of Tianjin, Kan tells the story of contemporary China through the lens of her own life. Kan, who moved to Beijing to study and eventually became a journalist, has written a memoir that is warm, moving and often funny. It’s an essential record of life as a Chinese millennial, with the rare advantage of having actually been written by one.

Caixin spoke with Kan about the challenges — and the significance — of memoir in conveying contemporary Chinese life to Western audiences, and about what it means to be young Chinese writer today.

Caixin: What inspired this memoir?

Karoline Kan: Since I was very young, I wanted to write stories — especially stories about people around me.

I was a bit of a strange child. I remember one of my cousins would always say, ‘(Karoline) is so annoying, she won’t play with me, she just sits behind our grandparents and neighbors.’ The women would be chatting and gossiping, and I just wanted to sit there. I didn’t know what they were really talking about, but I wanted to know.

If you read memoirs in Chinese, they are basically all by famous people, or about famous families. I feel that it’s a shame that the history of Chinese people is all about people on the very top level of society. There are so many interesting things happening in very common families.

Many old memoirs and books about China are also about the Cultural Revolution, but I wanted to present a new look into China today and Chinese young people. (My book) is not only about now — it’s about the past 20, 30 years. It’s a coming of age story of how we became who we are today.

Which writers did you look to for inspiration?

My inspiration comes in two parts. Some comes from foreign writers who wrote about China, like (former New Yorker correspondents in China) Peter Hessler and Evan Osnos. I read their stories and thought they were amazing — you see how they think of China, how they look at China. You see how Chinese people are like in their writing.

The second is Chinese authors, like Jung Chang, who wrote “Wild Swans.” Zhang Lijia also wrote a memoir, “Socialism is Great!” Their styles are very different — Jung Chang’s writing is elegant and elaborate, with all these fabulous details, and Zhang Lijia is very straightforward. (These books) more so inspired me in that they taught me that there’s a way, and there’s a market — that if I try, it’s possible to get published. They showed me the possibility.

How did your family feel about being included in a memoir?

They were confused and worried and cautious. My mom was the exception — she’s happy to share stories with me. But most people (in my family) don’t think their stories are worth publishing. They think they’re so common, that every family in China has something similar, or maybe more fascinating stories than ours. It was something really different for them. I don’t have any family members who’ve written a book, even in Chinese, and most of them are not really readers.

They would share things with me, but they would say “let’s not do an interview.” They don’t like the journalist-and-interviewee style. I tried to sit down with one of my uncles and I said, “I’m interested in the Cultural Revolution, and you were a Red Guard. I want you to talk more about it,” but then he got really nervous and he didn’t know what to say. So I found that didn’t work. Sharing personal histories and opinions has never been something that was encouraged — in extreme situations, it could cause problems.

Why did you choose to write in English, and how does that change your work?

When I was in high school, I worked so hard at English. When I was in college, I started to read in English, including some books about China by American and British authors. I like those stories, but I also wanted to be the person telling the story, rather than the person being told by somebody else. The language is like a tool, but without the tool, you can’t reach certain readers.

I’m not sure if my book would even exist (if it were in Chinese). Of course there are Chinese people who write about Chinese millennials, but if you just translated them into English, it would be very different. A lot of the details would just bore the readers. You have to do a lot of adjusting, and deleting, and adding information in there, when Chinese readers would immediately know the context.

The proportion of Chinese authors publishing in Western markets remains quite small. Did you come up against any challenges as a Chinese writer, working in English?

It’s quite natural that most of the books written in English in English(-language) markets are by English-speaking authors. Of course writing a book for anybody is difficult, but to convince people when you are from China and you are pitching to an American or British market, you have to do some extra work. If you’re from (the U.S. or the U.K.), you already know what people are expecting to hear.

I think my day job (as a journalist) helps me, and since my first job to now, I have been writing in English. I’ve learned a lot about Western journalism and which kinds of stories get popular. I think that really helped me in narrowing down (what to include in) the book. You have to pick out the things that are more important, more interesting to the readers.

Do you think more Chinese writers will publish books for English-speaking audiences in the future?

I think it’s going to happen. When I was in New York, I met a group of young Chinese journalists there, all working in English, some even covering politics in America. I think this is inspiring. I’m not saying writing in Chinese is not as good, just that it gives me hope that there are more possibilities, and that Chinese people’s stories can be presented by people who are from here. People like me are really trying to show a more nuanced image of China — real life is not black and white.

Cherish your background. I used to think I had a disadvantaged background, compared to kids from Beijing, because I’m from a small town. I was born in a village and moved to a town and kids living in Beijing had much better things than me and my friends. But now I don’t see it that way. I think no matter what your past is like, if you want to be a writer, it could be something you benefit from. Because everybody’s experience is unique, and in this way, there isn’t a better or worse background.

What do you hope readers get out of your memoir?

I just hope I can be the person who fills a gap. I also hope there will be more people, younger than me, coming out and writing their stories. Maybe my book can be an inspiration for them, just like some older Chinese writers who wrote in English have been for me.

“Under Red Skies: Three Generations of Life, Loss, and Hope in China” is out via Hachette.