The Invasion of the Livestreamers: How a Man Became a Meme 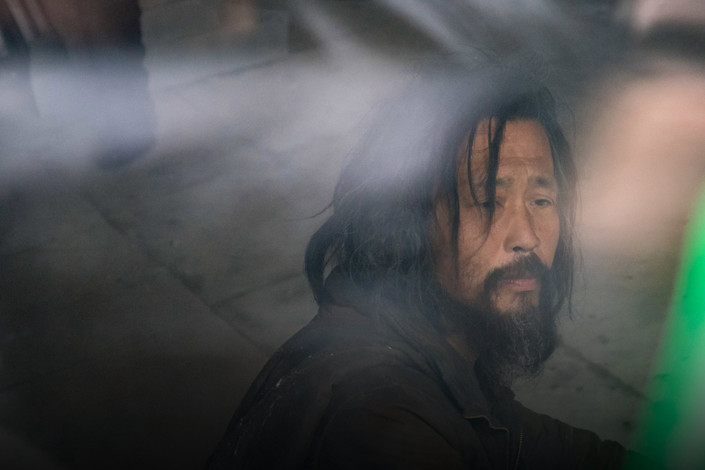 Shen Wei looks out of a window in Shanghai on March 21. Photo: IC

(Sixth Tone) — Some people desire nothing more than to retire from the world, remove themselves from society, and live however they see fit. But the world doesn’t always let them go so easily.

The latest proof of this came earlier this year, when a 52-year-old waste-picker named Shen Wei went from a familiar, unobtrusive fixture of Shanghai’s cityscape to unwitting viral video star seemingly overnight. But after being subjected to the combined attention of millions of online fans and bombarded with visits from dozens of content-hungry livestreamers — all desperate to bask in the reflected glory of China’s next big meme — Shen fled, leaving us to sort through the wreckage we made of his life.

According to his own account, Shen grew up in Shanghai and graduated from university in 1986 before taking a job in a government auditing office. His former employer confirmed that Shen worked there but said he went on sick leave in 1993. After a falling-out with his family, the two sides broke off contact, and Shen gradually drifted into an existence as a squatter and trash-collector.

So it went, until one day late last year, when a passerby, realizing that Shen Wei was in fact quite articulate and well-read, uploaded a clip of him quoting from the classical Chinese canon onto the short video app Douyin — the Chinese domestic version of TikTok. Viewers were amazed at the contrast between Shen’s sharp observations and his disheveled appearance and soon clamored for more of this unique, reclusive intellectual, whom they dubbed the “vagrant master.”

Shen’s stream of visitors gradually grew until mid-March, when a livestreamer included footage of a street sign near his haunt. Soon, livestreamers and online vendors flocked to the site, seeking to cash in on his fame. Videos of Shen flooded Douyin and the rival Kuaishou platform, and viewers rewarded their creators with a barrage of clicks.

Eventually, dozens of would-be internet celebrities camped outside where he was living every day, until it became impossible for him to leave. The fandom only intensified over time, as heavily made-up video stars jostled to take selfies with this curious master — and some even professed their desire to marry him. Amid all this hustle and bustle, we as a society thrust a quiet recluse into the spotlight against his will.

“I know myself well,” Shen was quoted as saying in an interview. “And while it’s true I love learning and that I read a lot of books, that doesn't mean I’m cultured.” Shen went on to castigate his interlocutors, whose own ignorance made him seem wise by comparison: “(You all) seem to think that this is very odd, but that doesn’t mean I’m learned. It’s your own fault: The simple truth is you read too little.” Despite his sudden rise to fame, Shen never claimed to be anything other than an ordinary person with a passion for reading, and he’s said that he chose to pick garbage of his own volition.

Nor did Shen ever claim any of the other ridiculous myths that sprouted up around him on the internet — that he was a top student at Fudan University, for example, or that he became disillusioned with the world after his nonexistent wife and daughter died in a car accident.

China has a long history of romanticizing wise but underappreciated hermits and recluses. Take the Sweeper Monk character from Jin Yong’s martial arts epic “Demi-Gods and Semi-Devils,” for example. Although his martial arts skills were surpassed only by his knowledge of Buddhist rites, the monk chose to remain in a humble position at Shaolin Temple, cleaning the cabinets that hold the sect’s holy texts.

One reason for the popularity of Sweeper Monk-type characters is that they embody a popular distrust of authority and rebelliousness against social norms. Shortly after Shen’s meteoric rise, some netizens took to joking, “The clowns are in the palace and masters are wandering,” meaning that the people in charge are fools, while the true masters are marginalized. This populist admixture of anti-elitism and anti-intellectualism led to many netizens looking for a new idol in Shen, even if they had to mold his life experiences to better fit their idealized archetypes. In the process, they deified someone who just wanted to be left alone.

Netizens weren’t the only ones desperate to turn Shen into something he’s not: Livestreamers and internet celebrities saw him as a cash cow to be milked. But, in the process, they forgot that there was a real person behind the Confucius quotes.

China’s short video market is huge, and it’s growing. According to a 2018 National Copyright Administration report, China’s online livestreaming market was worth nearly 40 billion yuan ($5.9 billion) in 2017, while the short-video market is expected to exceed 35 billion yuan by 2020. The combination of market size and low entrance barriers — all you need is a phone and an internet connection — has encouraged millions of hopeful celebrities to try their hands at livestreaming and video creation.

Unfortunately, many of these rely on novelty — whether through vulgarity, violence, or even soft-core pornography — to draw in users. The overall environment on China’s livestreaming apps is tumultuous at best, and there are few lines that livestreamers won’t cross in pursuit of fame and views. The apps themselves have long looked the other way to win the war for market share and viral hits.

Shen just happens to be the latest unfortunate soul to get sucked into the chaos. I think it’s safe to say that the internet celebrities who came all the way to take selfies with Shen or declare their love for him avoid most real-life waste-pickers they see on the street. Nor is there any evidence that they were truly seeking out Shen in the hopes of learning about the classics.

Instead, they branded Shen as a vagrant master, because they recognized a narrative dramatic and strange enough to bring in views. The whole story was a perfect encapsulation of the ways in which a mindless pursuit of clicks and fame have diminished our taste and cultural intelligence.

Worse, this mindset degrades the lives of all those who encounter it. Livestreamers surrounded Shen’s stoop, made him feel uneasy in front of the camera, and upended his once peaceful life. “I’m standing here; you can shoot what you want and make your money,” Shen once said. “I can’t do anything about it, and you don’t even treat me with the most basic dignity.”

Finally, on March 25, Shen had had enough. That afternoon, he left, leaving behind a note saying that he wanted a break. That didn’t stop his fans, however, and videos soon emerged showing a cleaned-up Shen with freshly cropped hair heading into the police station to re-register his ID card. Then, on April 9, Shen did something unexpected: He opened an account on Kuaishou and started engaging with his fans.

Perhaps Shen wants to end his vagrant existence. As for the livestreamers and viewers who made him famous, they’d already moved on to newer and fresher content by the time Shen re-emerged. In the end, it doesn’t matter how great a master you are; as long as the clowns are in the palace, we’re all just fodder for their antics.