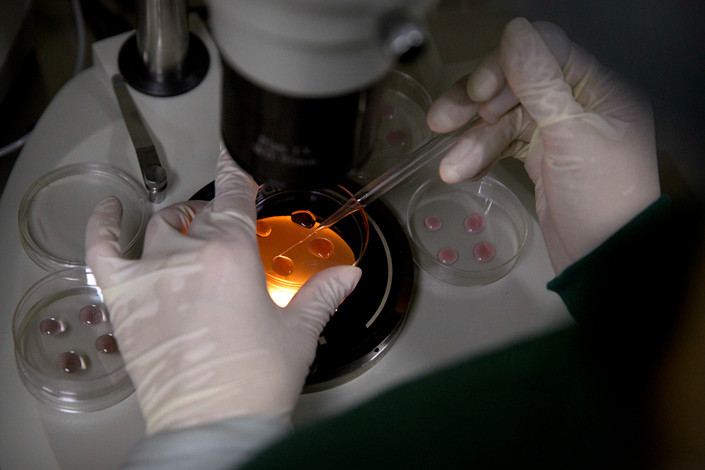 The latest draft of China's Civil Law requires that those engaged in medical and scientific research on human genes and embryos not endanger human health or violate ethics and morals. Photo: IC

According to state media, on the weekend the National People’s Congress (NPC) Standing Committee discussed a new draft of the personality rights section of the code — the first draft of which was released in August. The new draft includes specific rules on medical and scientific research involving human genes and embryos.

The news comes after Chinese researcher He Jiankui shocked the world in November with claims that two human babies were born with DNA he had altered in the lab. The announcement rocked the scientific community, with most pointing to ethics and safety concerns.

The codification of China’s civil law has been a long-running process under discussion since 2014. China’s legislators expect to enact it in 2020. The civil code is divided into six sections: property, contract, personality rights, marriage and family, inheritance, and torts, according to the official Xinhua news. The first draft of the personality rights section, intended to govern human dignity, was submitted for deliberation in August, and set standards for human clinical trials of new drugs and therapies. But Caixin has learned that during the deliberations, some advocated for stricter regulation of human experimentation.

The latest draft of the section, submitted to the NPC Standing Committee on April 20, appeared to adopt the calls for more stringent oversight. It expands the scope to clinical trials “developing new drugs, medical devices, or developing new prevention and treatment methods,” and requires approval from an ethics committee as well as from authorities. The draft deletes provisions that prohibit any kind of remuneration or reward for participating in a trial.

It also requires that those engaged in medical and scientific research on human genes and embryos not endanger human health or violate ethics and morals.

The second draft’s regulations are much tighter than the first, said Yang Lixin, a professor at Renmin University’s School of Law. As the development of new technologies is encouraged, it is also important to improve rights protections for those involved in clinical trials, he said. Research should be approved by the relevant authorities and by ethics committees in accordance with law.

Du Yubo, NPC Standing Committee member and president of the China Association of Higher Education, said during deliberations that the new regulations were a good response to developments in human rights and corrects the current, outdated laws in this respect.

However, other scholars and members of the NPC Standing Committee had qualms with the proposed changes. Liu Jingwei, a professor of Chinese law at the China University of Political Science and Law, told Caixin that such issues were too complex to be included in the Civil Code and should be regulated with more specific legislation.

In February, China’s National Health Commission introduced draft regulations to restrict the use of genome editing in humans that would require the commission’s approval for gene editing of any cell that will end up in a human, including embryos.

Jia Tingan, a standing committee member and the chair of the NPC’s Overseas Chinese Affairs Committee, proposed that the legislation should make clear the provisions for the ethics committee. “It should be clear which organization the committee belongs to — is it official or private? Is it an administrative organization? — and who gives it its review responsibility,” he said.

Tian Hongqi, a standing committee member and the president of Zhongnan University, suggested adding a provision to allow participants in clinical trials to withdraw consent at any time without liability.

Yang, a civil law scholar, said that the codification of “personality rights” in the civil code can in principle govern some practical problems, but that the specific operations should be stipulated by more specific laws and regulations.