How Exam Stress Pushed a Chinese Schoolgirl Into Drug Addiction 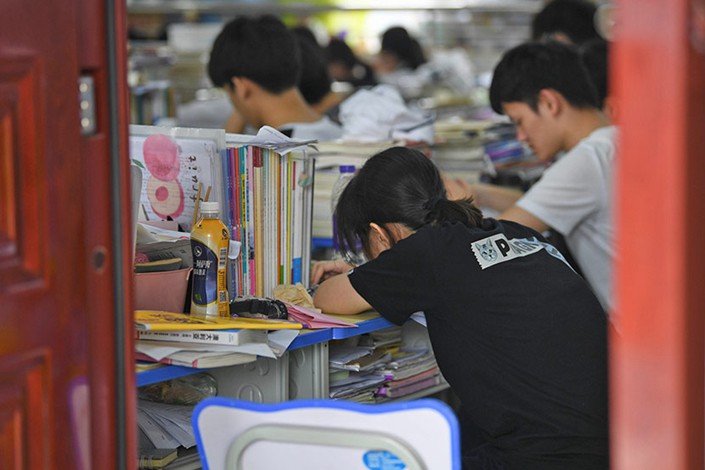 Sixth Tone — Like many Chinese high schoolers, Xiao He once dreamed of going to a prestigious university, getting a good degree, and moving into a lucrative job — perhaps in one of those glittering high-rise office blocks she’d seen in China’s cities. So when her grades began slipping in September 2017 — the start of her final year before taking China’s notoriously grueling national college entrance exam, or “gaokao” — Xiao was willing to try anything to improve them, even illegal drugs.

By last summer, Xiao’s gaokao preparations were in tatters. She had first started taking large doses of Ritalin, a prescription-only stimulant commonly used to treat attention deficit hyperactivity disorder (ADHD) and other medical conditions. Later, she became addicted to methamphetamines, synthetic drugs whose production, trade, transport, and possession are illegal in China. By the time Xiao was admitted to rehab this past October, she was hallucinating, and her hair was falling out in clumps.

Xiao, who initially procured Ritalin with her father’s help before buying methamphetamines online by herself, says she didn’t know what either substance was until she came to the rehab center. To her, the little white tablets that helped her focus in class were just “congming yao,” a harmless-sounding term that roughly translates to “smart pills” and includes several substances that, in the West, are sometimes called “study drugs.”

In China, smart pills fall into two main categories, explains Xu Jie, a doctor at Beijing High Tech Rehabilitation Center who oversaw Xiao’s recovery in the southwestern megacity of Chongqing. One type is amphetamines such as Adderall, which have similar chemical structures to methamphetamines, have similar uses, and share similar side effects. The other type, which is generally referred to as nonamphetamines, includes Ritalin. “Theoretically, the risks of taking Ritalin are much lower than taking Adderall,” Xu says. “Adderall isn’t available in domestic hospitals yet, but there are always ways for people to get hold of it.”

China hasn’t conducted any official surveys into how many children and young adults use smart pills. In the United States, studies conducted during the past few years have shown that significant numbers of American high school students have misused study drugs. For example, a 2018 survey by the National Institute on Drug Abuse that studied nearly 45,000 American 8th, 10th, and 12th graders reported that up to 4.6% of 12th graders had taken Adderall without prescription in the past year, and another 0.9% had done the same with Ritalin. In 2015, those figures were higher, at 7.5% and 2%, respectively.

Despite the lack of data, Chinese medical experts warn that use of smart pills, while still limited, is increasing — and possibly linked to the immense pressure to succeed that many Chinese people feel at school, college, and work. “In the past two years, I’ve received 61 young patients (most aged between 17 and 25) who have developed addictions after taking so-called smart pills,” says Xu, estimating that the number of such cases roughly doubled between 2017 and 2018. “One-third of these people were final-year high school students preparing to take the gaokao. The rest were all young people in their early 20s, dealing with huge pressure as they just started their careers or opened their first businesses.”

The problem is compounded by the fact that China lacks public awareness of smart pills and their associated risks. For instance, although Chinese doctors frequently prescribe Ritalin for the treatment of ADHD, many people remain unaware of the condition and have little access to information about the side effects of the medicines used to treat it. Discussions on Chinese social media have even portrayed Ritalin and other smart pills as miracle cures that boost brain function during exams and interviews, failing to mention that side effects can include anxiety, insomnia, and psychosis. “If they understood the risks, no parent would give these drugs to their children,” says Xu.

Xiao first learned about smart pills when she overheard two classmates discussing how the substances supposedly helped to improve academic performance. Xiao — who had recently dropped out of the top 20 highest-scoring students in her class and worried that she was struggling through her all-important final year — saw an opportunity to redeem herself in her ambitious father’s eyes. “At the time, I was so depressed. I had always scored among the top 10,” Xiao recalls. “My father had always been very strict about my studies, and I hadn’t let him down before.”

According to Xiao, her father was initially skeptical when she told him about smart pills. But a few days later, he came back home with a plastic bag filled with tablets that, months later, Xiao would discover were Ritalin. Neither of them were aware that the substance was addictive, Xiao claims. “I didn’t ask where he got it, what it actually was, or what it was made of,” Xiao recalls. “I was so eager to do better at school that I just started taking them right away.” (Xiao’s father declined Sixth Tone’s interview request and asked for anonymity, saying that the issue was a domestic matter.)

Most people who take smart pills in China purchase them in countries where they’re more freely available, says Hu Zhongming, deputy director of a psychotherapy center at the Zhejiang Liangzhu Compulsory Drug Rehabilitation Service in the eastern city of Hangzhou. “Many parents buy pills while traveling in the U.S. or Switzerland, or they entrust close friends or relatives abroad to make the purchases for them,” Hu explains.

Xiao doesn’t know how much her father spent on the first batch of Ritalin pills. When she first started using them, she took one tablet per day. But because she saw no significant difference in her grades, she later increased the dosage to two tablets per day without informing her parents. Recommended Ritalin dosages can vary significantly from patient to patient.

“After (increasing the dosage), I felt I could concentrate better in class and more easily understand what my teachers were explaining,” Xiao says, although she now struggles to remember how quickly this change took place — a problem that doctors partly attribute to her drug abuse. “Even though I try hard to recall certain things, I just can’t remember the details.”

Xiao never told her friends or teachers that she was taking smart pills. Her grades improved slightly, but not by much. Ahead of certain exams, Xiao increased her dosage again, to four or five tablets per day. Her father, worrying that Xiao was becoming excessively reliant on the drug, stopped buying it in December 2017. Xiao thinks that, by that point, she was already addicted. “Without the pills, I couldn’t get anything done,” she says. “I couldn’t focus in class. I couldn’t fall asleep at night. I felt constantly on edge.”

Xiao decided to take matters into her own hands. Unbeknownst to her parents, she searched for the term “smart pills” on Baidu — China’s biggest internet search engine — and soon found a merchant on the social networking platform WeChat, who claimed to be a salesperson at a company producing stimulants for educational use. Soon, Xiao was spending 2,000 yuan ($300) of her pocket money on the pills. She didn’t keep track of how many pills arrived in each shipment but noticed they were mailed through domestic couriers from the inland provinces of Gansu, Sichuan, and the Guangxi Zhuang autonomous region, not from abroad.

The new pills were different from the ones Xiao’s father had bought her. Soon after she started to take them, Xiao began to feel abnormal. She often felt nauseous, started sweating for no reason, struggled to fall asleep, and began to lose her hair. In the early spring of 2018, her concerned parents took her to see a doctor, but Xiao still didn’t tell anyone that she was taking smart pills, and the doctor attributed her health issues to a long-term lack of sleep. Xiao carried on taking the tablets.

Then, during the first four months of last year, Xiao’s symptoms spiraled out of control. Her weight fell from around 50 kilograms (110 pounds) to just 40. She began experiencing visual and auditory hallucinations, lost her appetite, became irritable, and shed clumps of her hair. With one month to go before the gaokao, Xiao withdrew from school for medical reasons. She never returned.

In October, Xiao was hospitalized in the Chongqing branch of the Beijing High Tech Rehabilitation Center. Here, she finally discovered that the pills her father bought her were Ritalin. Blood tests also confirmed that the batch she’d bought on WeChat contained methamphetamines. Xiao says that when she came clean about purchasing methamphetamines, her father became so angry that he checked her in for rehab and didn’t visit her for a month. “He was furious that I’d been using drugs. He decided right there to punish me by keeping me in the hospital,” she recalls.

Due to deep-seated social stigmas against drugs and addiction, few young people with drug dependence choose to be hospitalized in China, Xu says, adding that only two of the 61 patients he treated for smart-pill addictions in the last two years stayed at the center throughout their rehabilitation. The majority attempt recovery through outpatient clinics or rent accommodation near the institutions where they are being treated. “Parents are still reluctant to bring their children to hospitals like ours,” says Xu. “We accommodate lots of adults with drug dependency, and parents don’t want their children to be in close contact with them.”

Hu, from the Zhejiang-based rehab center, says that parents are often reluctant to hospitalize their drug-addicted children because they regard it as “shameful,” but this delays their recovery. In the last month, he says he’s received three inquiries from parents who gave their children smart pills leading up to last year’s gaokao and now worry about adverse health effects. “They’ve all noticed changes in their children’s temperaments — they’ve become irritable and argumentative, or they’ve developed insomnia,” Hu says. “But they never connected the problems with smart pills until (recently).”

During two months of rehabilitation in Chongqing, Xiao took anti-addiction medication and cognitive enhancers. She also underwent psychotherapy to relieve depression. Doctors told Xiao she had recovered by the end of 2018, and she has been clean ever since. Nonetheless, her former addiction may have done irreparable damage to her memory. “There are lots of things that I try very hard to recall but can’t,” she says.

After being admitted to rehab, Xiao changed her mobile phone number and cut off contact with her former classmates. She has no plans to return to school or take the gaokao. For the first few months of this year, Xiao volunteered at the clinic, sharing her experiences with newly admitted patients, some of whom are addicted to harder drugs. Last month, the hospital appointed her as a full-time cashier. Xiao now works from 8 a.m. to 5 p.m. six days a week and lives in the on-site dormitory. “I like keeping myself occupied with work,” she says. “It gives me a sense of achievement.”

Although she’s kicked her drug habit, Xiao’s relationship with her father is still recovering. But she’s forgiven him for buying the initial batch of Ritalin that led to her spiraling addiction. “At first, I blamed my dad for how I am today,” Xiao says. “But now, I think he (gave me those pills) to help me. He just went about it the wrong way.”

This story was originally published by Sixth Tone. Click here to read the original.