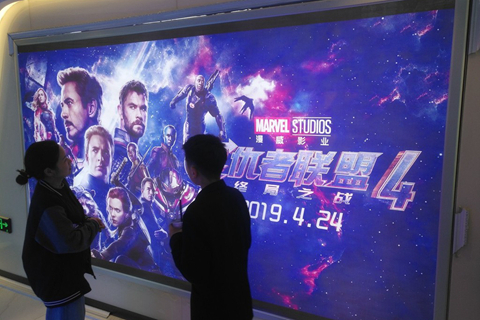 China’s movie theaters welcomed a record number of viewers during this year’s four-day Labor Day holiday as people were attracted by blockbusters such as “Avengers: Endgame.”

Box office sales surged 50% from the previous year to 1.5 billion yuan ($223 million) during this year’s extended holiday, according to a market data platform operated by Alibaba Pictures Group.

A total of 34.6 million viewers went to theaters during the holiday, up 19% from the previous year.

Disney's “Avengers: Endgame,” which is in its second week in theaters, accounted for more than 80% of China’s box office during the holiday. Ticket sales for the film totaled 1.7 billion yuan between May 1 and May 4, followed by the Lebanese drama film “Capernaum,” according to market research institute Entgroup.

“Endgame” generated more than 3.9 billion yuan ($578 million) in China as of May 5, making it the third-most popular movie in China. Globally, the film has hauled in $2.2 billion.