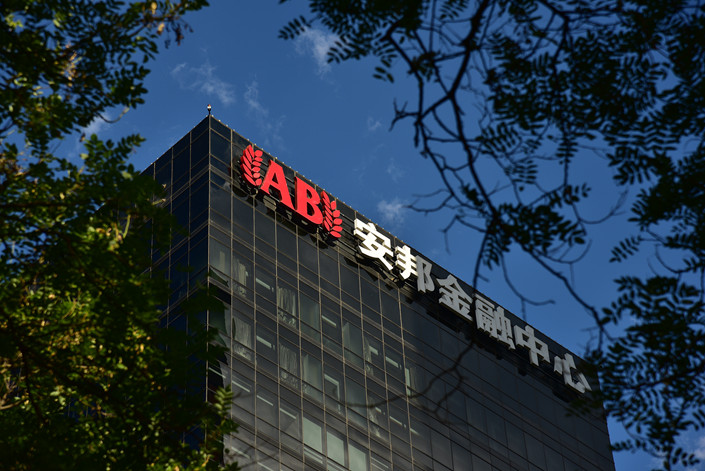 (Bloomberg) — The Chinese government is taking a major step in its efforts to sell a strategic stake in Anbang Insurance Group Co. Ltd., the acquisitive insurer it took over last year amid a fraud investigation into its former chairman.

Under a plan overseen by the industry regulator, most of Anbang’s businesses will be moved into a newly created company called Dajia Baoxian, people with knowledge of the matter said. Some policies sold by Anbang’s property insurance unit won’t be transferred to the new entity, the people said, asking not to be identified discussing sensitive information.

To make Anbang’s business more palatable to strategic investors, regulators are stripping out investment-type policies its property unit sold in excess of quotas assigned by the government, the people said. Those policies had been a key hurdle in discussions with potential investors because of uncertainty about how they should be handled, one person said.

China’s government, which took the rare step of taking over Anbang in early 2018 as former Chairman Wu Xiaohui was being prosecuted for fraud, wants to reduce its ownership by February next year. The China Banking and Insurance Regulatory Commission, Anbang’s ultimate custodian, didn’t respond to a fax seeking comment.

Court documents made public during Wu’s trial showed the property unit had sold 724 billion yuan ($105 billion) worth of investment products in excess of government-approved quotas through early 2017. Such contracts typically offer yields well above regular bank deposits while providing limited insurance coverage for accidental injury or death. The amount cited in court documents might since have shrunk as some policies expired.

It isn’t clear whether property assets Anbang bought over the years, including the Waldorf, will be also injected into Dajia Baoxian or sold separately. Anbang is selling Strategic Hotels & Resorts Inc., a U.S. luxury hotel chain it bought in 2016. The Waldorf isn’t part of Strategic Hotels.

Anbang’s “risk disposal work is proceeding orderly,” the company said in a statement last month as it announced plans to reduce registered capital by about a third. The move is part of Anbang’s strategic restructuring, it said without elaborating.

The company has already made some headway selling assets, including a Belgian insurer, a leasing business and a securities firm. But the government has been quiet on progress in seeking fresh strategic investors for the company itself. Bloomberg News reported in October that Cerberus Capital Management LP, Swiss Re AG and Temasek Holdings Pte were among parties that have held preliminary discussions about buying a stake in Anbang.

Dajia Baoxian, which translates to “Everyone Insurance,” will engage in businesses ranging from insurance underwriting to consulting and brokering, according to trademark applications filed over the past six months by Sino-Ocean Bangbang Real Estate Co., a joint venture between Anbang and Sino-Ocean Group Holding Ltd. The applications, posted on the website of the National Intellectual Property Administration’s trademark office, didn’t mention plans to inject Anbang assets into Dajia.

Following the state takeover and Wu’s imprisonment, Anbang is seeking to turn itself into a traditional insurer less dependent on investment products sold to China’s millions of yield-hungry savers.

It’s a tall order. Revenue from traditional life insurance policies tumbled 90% last year as Wu’s legal woes scared away customers and the company tried to sell longer-term products, people with knowledge of the matter said. Such policies accounted for less than 10% of the life unit’s revenue. Investment-type policies made up more than 90% after sales jumped four times to a near-record.

Seeking to turbocharge a recovery, Anbang plans to rely on China’s more than 2,600 professional insurance agencies and brokers to sell its life policies, according to Yang Xiaoling, a vice president in charge of the life insurance arm.

Anbang relies almost entirely on bancassurance, or bank-counter sales of mostly short-term investment products that provide attractive yields but little risk protection for the buyer. It was such policies that supercharged Anbang’s growth and gave it the firepower to pursue billion-dollar acquisitions.

“While bancassurance is our strength, individual life is Anbang Life’s weakest link,” Yang told scores of insurance agencies and brokers invited from around the country at a forum earlier this month in Beijing. The “agency channel is the fast lane for insurers to enter new segments of the market, and it could have a management cost advantage if handled properly.”

While the nation’s big insurers all rely on their own agent forces, with China Life Insurance Co. and Ping An Insurance (Group) Co. each hiring more than 1 million agents, agencies at the forum in Beijing were optimistic they can help Anbang spur long-term policy sales by forming strategic alliances to sell tailored products.

“You can sail in a borrowed boat,” said Chen Shaohua, a general manager at YingHai Insurance Agency Co., using a Chinese idiom which means success can be found by employing outside help. Assuming it can develop the right products and has government support, “Anbang can rise again in a year,” she said.

Rapid expansion with external agencies that also sell other insurers’ policies means Anbang will need to have a suite of competitive products and commissions, according to Steven Lam, a Hong Kong-based analyst with Bloomberg Intelligence. Stability of agency relationships can be a concern, he said.

James Chang, the head of PricewaterhouseCoopers LLP’s China financial services consulting practice, said it’s important for firms to seek cooperation in the digital era because many insurance services can be outsourced.

By working with external partners, “everybody becomes more professional, more efficient, and customer experience can also improve,” he said. “The key is at the implementation level, and how to achieve a seamless connection.”