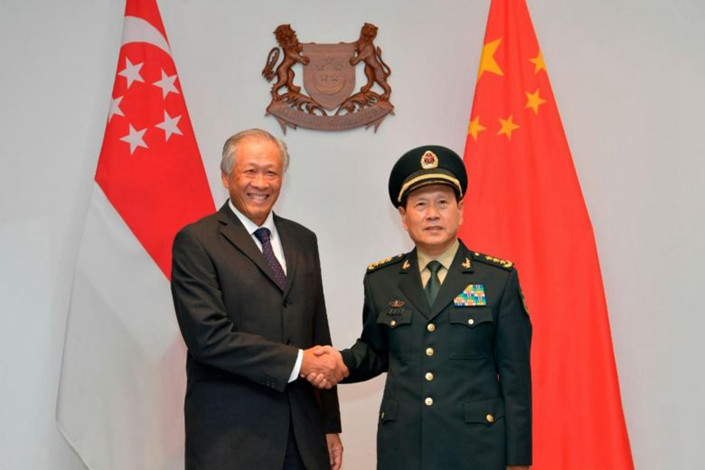 (The Straits Times) — China and Singapore have agreed to revise a defense pact which could include larger-scale military exercises and frequent high-level dialogues, as part of efforts to deepen defense ties and cooperation.

The revised Agreement on Defence Exchanges and Security Cooperation, expected to be signed later this year, could also include new arrangements for services-to-services cooperation and the establishment of academic and think-tank exchanges.

The announcement came after a bilateral meeting on Wednesday (May 29) between Defence Minister Ng Eng Hen and his Chinese counterpart Wei Fenghe, who is making his introductory visit to Singapore.

During the meeting, both ministers agreed on a substantial program to deepen defense ties and step up bilateral engagements on various fronts, said a Ministry of Defense (Mindef) statement.

These included an agreement for Exercise Maritime Cooperation by both navies to be held in 2020, which will be the second such exercise.

They also welcomed Exercise Cooperation between the two armies this year, which will be the fourth in the series.

“Both ministers also agreed to revise the Agreement on Defense Exchanges and Security Cooperation (ADESC) between Singapore and China, which was first signed in 2008,” said Mindef.

“The proposed exchanges to be introduced or stepped up include the establishment of frequent high-level dialogues, new arrangements for Services-to-Services cooperation, academic and think-tank exchanges, as well as an increase in the scale of existing bilateral exercises.”

The Chinese minister, who is also state councilor, is visiting Singapore from Tuesday to Sunday.

He will attend the annual high-level defense forum, the Shangri-La Dialogue (SLD), where he is due to speak on Sunday. His attendance this year will make him the highest-ranking Chinese official to attend the SLD since 2011 when former defense minister Liang Guanglie spoke at the event.

China and Singapore had committed to refreshing the defense agreement in a joint statement released during Premier Li Keqiang’s official visit to Singapore last November.

The first Agreement on Defense Exchanges and Security Cooperation was signed by Mindef and the People’s Liberation Army (PLA) on Jan. 7, 2008.

Mindef said then in a statement that the signing marked a significant milestone in the bilateral defense relationship and was testament to the growing defense ties between the two countries.

It formalized ongoing activities between Mindef and the PLA such as the exchanges of visits, attendance at courses and seminars and port calls. It also included areas of cooperation such as humanitarian assistance and disaster relief.

On Wednesday, both ministers also discussed regional security and practical ways in which the Association of Southeast Asian Nations Defense Ministers’ Meeting-Plus (ADMM-Plus) could build confidence between militaries and prevent conflict.

Wei, a member of the Central Military Commission, was accorded a guard of honor welcome at Mindef on Wednesday before meeting Ng.

He will visit RSS Singapura-Changi Naval Base to tour the Information Fusion Centre, the Archer-class submarine RSS Swordsman and the Formidable-class frigate RSS Stalwart on Thursday.

On Friday, he will visit the headquarters of the 3rd Singapore Division, which will host Exercise Cooperation later this year.

Mindef said Wei’s visit underscores the longstanding, warm and friendly bilateral defense relations between both sides that have deepened and grown over the years.

It added that the Singapore Armed Forces and the PLA interact regularly through port calls, bilateral exercises, mutual visits, and cross-attendance of courses.