Australia’s Largest Solar Plant Will Be Built with Chinese Technology 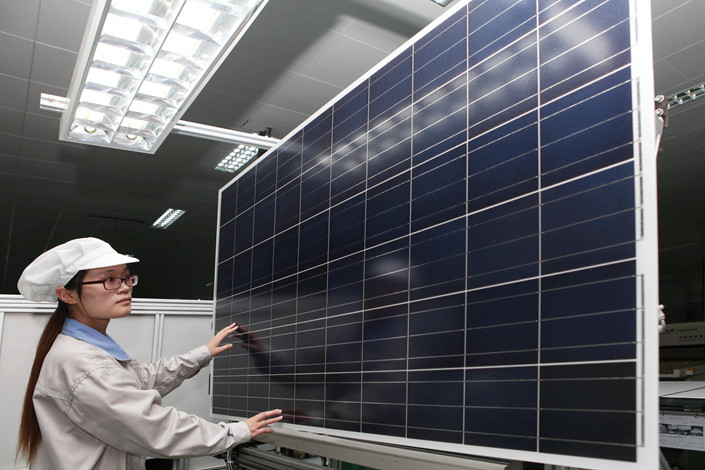 Workers at an energy company in Jiangsu province produce solar panels for export to Europe and the United States, May 20, 2018. Photo： VCG

(AFR) — British billionaire Sanjeev Gupta says a deal to build Australia's largest solar plant with Chinese funding and technology heralds a "new era" in economic co-operation between the two countries which goes beyond selling products to each other.

Acknowledging there were "tensions" between Canberra and Beijing, Gupta said it was time China realized it could avoid trade disputes by creating jobs and building industries in the countries they were investing in instead of relying on a trade-based relationship which focused on taking resources away.

"I'm very concerned (about the US-China trade war). It affects us in many ways," Gupta said in an interview in Shanghai on Monday.

"If China invests in countries to develop local employment and local industries rather than just sell products they will get support. If they only want to sell products to countries, then that's a problem.”

The project will power the steelworks, which plans to expand to 10 million tons of steel output a year from 1.2 million tons, and the first deal under a broader $1 billion investment program by his majority-owned renewables company SIMEC Energy Australia. It would product 600 GWh of energy a year.

Gupta, who has rejuvenated a string of steelmaking and engineering plants in the UK over the past few years, also wants Australia to revive its industrial and manufacturing sector through investment and overcoming high power prices with renewable energy.

"It is the biggest travesty of Australia. We export all our raw materials to China and other countries and they make the products and some of those products come back to Australia. Our industries get decimated in the process."

Gupta, who was part of a large Australian business delegation in Shanghai over the weekend, is a vocal supporter of China's Belt and Road initiative and believes there is potential to export China's expertise building the country's vast steelworks and renewable energy projects to developed countries like Australia. His comments came as US-China trade tensions escalated over the weekend, with Beijing threatening to retaliate against American companies.

While he declined to take political sides following last month’s election defeat of the Australian Labor Party, which was supportive of renewable energy projects, Gupta said all parties should encourage investment. He also reaffirmed his support for underwriting guarantees which could lower the cost of solar power as proposed by the Australian Competition and Consumer Commission (ACCC).

Shanghai Electric, a Chinese multinational which makes equipment used in coal, nuclear and renewable energy projects, will provide engineering, procurement and construction services for the project.

Gupta said on Monday that construction of the Cultana solar energy project near the revived Whyalla steelworks would start immediately. He would not put a dollar figure on the value of the project.

Gupta bought the former Arrium business in Australia from administrators KordaMentha for about $AU700 million ($487 million) in 2017, which gave him ownership of the Whyalla steelworks and smaller steel mills in Sydney and Melbourne. GFG bought a controlling stake in ZEN Energy in 2017 and re-badged it SIMEC Zen Energy.

He has rejuvenated a string of steelmaking and engineering plants in the UK over the past few years and is using a business model he calls "Greensteel", which uses recycled scrap metal as feedstock for plants, and powers them with renewable energy.

The Cultana Solar Project, located on land mostly owned by the Whyalla steelworks, will utilize 780,000 solar panels on an area of 1100 hectares and employ 350 people in the construction phase. It will produce enough energy to power 96,000 homes.

Gupta is plowing funds into renewable energy projects at a time when energy policy stalled in Australia under the Coalition. Gupta also wants to establish an electric car manufacturing operation in Australia,

The Gupta family interests generate annual revenues of $12 billion and have a global workforce of 25,000 people. With the support of government grants in many cases, his eye-popping string of acquisitions has been accelerating. He declined to comment Monday on UK reports that Liberty House, his industrial conglomerate, would bid for UK giant British Steel, which has been placed into liquidation.

Close to $2 billion has been spent on acquisitions and capital investment in the past five years. His first big foray was just five years ago, when he bought the Mir steelworks in Newport, south Wales.