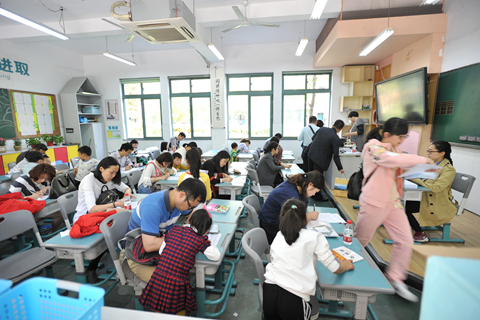 As China’s school admissions season begins, some parents are jumping through more than the usual hoops to enroll their children in a good school.

Shengfei told Caixin that it was entirely up to parents whether to bring their certificates to the event. Private schools have “some level of autonomy” when it comes to admitting students, an official at the local education bureau told Caixin Monday.

The school didn’t say explicitly that parents’ certificates would affect children’s applications, but people familiar with the issue say the certificates will likely be used to narrow the pool of applicants based on parents’ educational levels.

Competition is fierce for spots at top institutions in China, where there’s often great disparity between schools when it comes to teaching standards and resources.

Last month, the Ministry of Education ruled that schools for children undergoing China’s nine years of compulsory education must not use their own in-house exams as a basis for admitting students. But the ministry didn’t specify whether admissions interviews were banned.

Shengfei isn’t the first school to be criticized for judging potential students based on their parents’ qualifications. Multiple schools across the country have reportedly admitted only children whose parents graduated from university, while some even asked about grandparents’ occupations.

Xiong Bingqi, a deputy director at the Chinese think-tank 21st Century Education Research Institute, said schools may be motivated by a consideration unique to the country — whether parents will be able to help children complete their homework, an accepted practice in China.