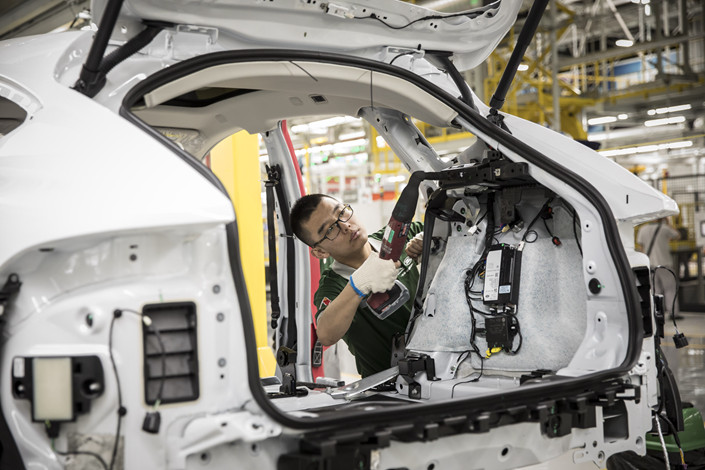 After soaring for the past three decades, demand for autos in China has unexpectedly hit a bump. Photo: Bloomberg

(Bloomberg) — An influential Chinese auto-industry trade group has asked authorities to unleash stimulus measures to counter the sector’s worst slump in a generation.

The state-backed China Association of Automobile Manufacturers asked authorities to relax limits on license plates issued in some cities and lower levies paid by vehicle buyers in rural areas, according to Xu Haidong, an assistant secretary general at the group.

“Auto demand became collateral damage,” Xu, who’s based in Beijing, said in an interview on Tuesday, without further elaborating on the proposed measures. “Loosening car purchase restriction in big cities would be the most effective approach to revive sales for the time being.”

CAAM’s proposal comes in the wake of the world’s largest auto market shrinking every month for about a year, and builds on the growing calls for government help as escalating tensions with the U.S. threatens to deal a further blow to the $12.2 trillion economy. Last month, the nation’s top auto-dealers association sought the government’s aid to boost sales after inventory piled up and profit margins shrank.

CAAM, as the car association is known, represents about 2,700 members in the auto industry.

After soaring for the past three decades, demand for autos in China has unexpectedly hit a bump after the government cut excess industrial capacity, tightened environmental norms and cracked down on peer-to-peer lending, Xu said.

Tensions between the world’s two biggest economies now threaten to damage trade and confidence in the market, where carmakers from Volkswagen AG to General Motors Co. have invested billions of dollars in the hope that China would keep growing even as demand wanes in Europe and North America.

While the central government in Beijing has been considering steps to stimulate demand, the National Development and Reform Commission has said any changes to policies will be made only after consultations with all relevant parties and thorough debate.

Stricter emission standards that will become effective in July in some areas also weighed on automakers as consumers postpone purchases, according to Xu. Automakers and sellers have been slashing prices to help digest the stockpile of the older models, with discounts of as much as 35%, he said.

“Automakers are in a tough spot,” said Xu. “They have been scratching their heads every month wondering what emission standards their cars should meet.”