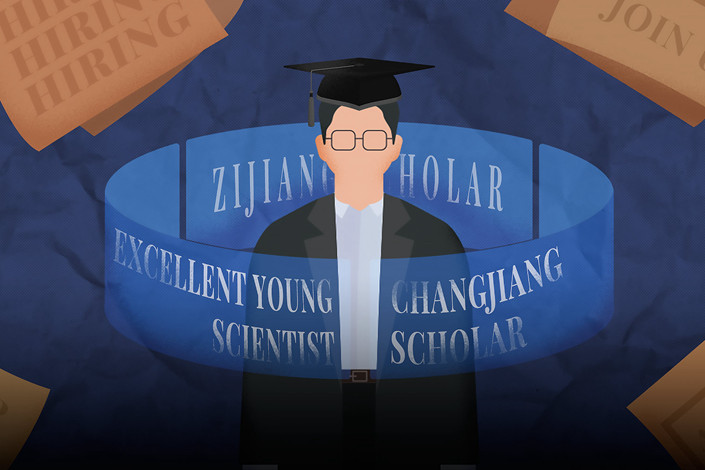 (Sixth Tone) — China’s universities are in the midst of a full-blown talent war. In March, Ningxia Normal University, a small school in the remote, northwestern Ningxia Hui autonomous region, made headlines for offering so-called high-level “talents” up to 1 million yuan ($145,000) a year in salary, up to 20 million yuan in startup grants, and resettlement allowances as high as 2 million yuan to join the school’s faculty. The catch: They must come wearing the right “talent hat.”

At Chinese universities, “talents” — officialese for highly accomplished academics, researchers, or professionals — are often ranked according to so-called talent hats: honorary titles awarded by various levels of government and academia in recognition of an individual’s academic exploits. Originally aimed at attracting, retaining and motivating high-level scientific research personnel, these titles typically come with hefty stipends that help to supplement often meager academic salaries. Recently, however, talent hats have come under increasing scrutiny for warping scholastic incentives and turning the ivory tower into a veritable vanity fair.

The current obsession with talent hats is a relatively recent phenomenon. In the 1990s, only a handful of professors had honorary titles — “academician,” for example — and these were rarely tied to pay. At the time, the low pay of university professors and researchers was a widely recognized and often criticized phenomenon: Some academic jobs paid even less than blue collar work, and many scholars left academia or took their talents abroad.

In 1998, the Ministry of Education and the Hong Kong-based charitable organization the Li Ka Shing Foundation teamed up to launch the Changjiang Scholars Program, which sought to strengthen China’s domestic research capabilities by providing worthy honorees with a 100,000 yuan yearly subsidy — since raised to a maximum of 200,000 yuan — and access to research funding. At a time when even a top university professor with almost 40 years of teaching experience could earn less than 10,000 yuan a year, this was a windfall.

Local governments, universities, and research organizations around the country quickly began copying this model. There are currently at least 200 such schemes — and corresponding talent hats — spread across the country. Together, they have attracted or retained thousands of skilled researchers and technicians to work in China.

Yet even with the proliferating talent hats, salaries for professors, especially those without talent hats, have not kept pace with the cost of living. In 2017, leaked salary data for professors at Fudan University in Shanghai caused a stir online when it showed that a number of teachers at the school — one of China’s best, in one of its most expensive cities — were making less than 200,000 yuan a year.

Nor are they an exception. According to a 2014 survey on the living conditions of young university faculty jointly conducted by Tencent and the human resources site MyCOS, 73% of teachers at undergraduate institutions reported earning less than 5,000 yuan a month. More than nine out of 10 respondents said they were dissatisfied with their salaries, and nearly half believed that what they earned was insufficient to meet their family’s basic needs while also making housing payments.

As part of a 2006 higher education reform, universities began tying scholars’ base salaries to their academic output, research performance, and involvement in talent programs. And because the number of talent hats at a university can affect everything from the school’s ranking to enrollment, subject evaluations and societal reputation, schools are incentivized to chase after as many talents as possible.

In other words, wearing a talent hat to the table can make a big difference in job searches and salary negotiations. Among equally ranked professors at select Shanghai universities, Changjiang Scholars-recognized experts earn more than twice as much as ordinary professors, and are eligible for up to 8 million yuan in housing subsidies. In traditionally educational resource-strapped parts of the country, some schools offer up to 10 times the average local professorial salary to talent-plan awardees, creating huge salary gaps within faculties in the process.

It’s easy to see why university teaching personnel dissatisfied with their salaries now view recognition from talent schemes as the ultimate way to vault up the academic ladder — and the pay scale. Given the importance schools attach to recruiting recognized talents, university teachers and researchers know that once they don a talent hat, their future is essentially guaranteed, regardless of whether or not they continue to perform at a high level.

This system can warp academia, however. Local governments and universities often prefer to spend large sums hiring established talents who can immediately bring prestige and academic resources to the school rather than invest in training or hiring young and middle-aged scholars who are at their peak.

For example, the Recruitment Program of Global Experts in Binhai New Area, in the northern megacity of Tianjin, offers Nobel Prize winners and academicians of the Chinese Academy of Sciences up to 12 million yuan in scientific research funds and living subsidies to work at local schools or research institutes. However, the winners of such awards are generally between 50 and 70 years old, and not necessarily at the cutting edge of their fields.

And since many talent programs only recruit early and mid-career academics — though they reap admittance rewards for the rest of their professional lives — some scholars are rushing to publish as much research as possible before they become ineligible and miss their chance.

The cutoff age for the prestigious Excellent Young Scientists Fund is 38 for men and 40 for women, and Changjiang Scholars in natural sciences fields generally must be under 45 years old. In order to win these “hats” before they reach the age limit, young scholars — many of them already close to 30 by the time they finish their doctorate degrees — often choose short projects with quick returns, but perhaps less potential for real breakthroughs.

The central government is beginning to recognize the downsides of the talent hat system. In 2018, the State Council — China’s Cabinet — issued new rules on talent plans meant to reduce their influence on hiring decisions and wages. In particular, universities and research institutes are being instructed not to directly link compensation to talent hats and scholars told not to use old titles or list their talent hats in research proposals.

While noble, these steps are unlikely to solve the underlying problem with the talent hat system. First, instead of pouring resources into a patchwork of talent schemes, schools should raise and standardize teachers’ base pay. If the country can narrow the gap between so-called ordinary scholars and their talent hat-wearing peers, there will be less financial incentive to chase after honorary titles.

Second, the number of talent hats at a university should play a smaller role in school evaluations and rankings. When evaluating faculty quality, the presence of young, capable scholars demonstrating great potential should be weighted more heavily, and the focus should be on high-quality academic papers, not titles. This would force colleges and universities to focus more on developing their young talent.

Talent matters. But how we identify, cultivate, and reward talented individuals is equally important to building a healthy society. Talent hats should be markers of original thinking and important research, not shortcuts to wealth and professional status.

Zhang Ruomei is a research assistant and analyst at the Institute of Public Policy at South China University of Technology.