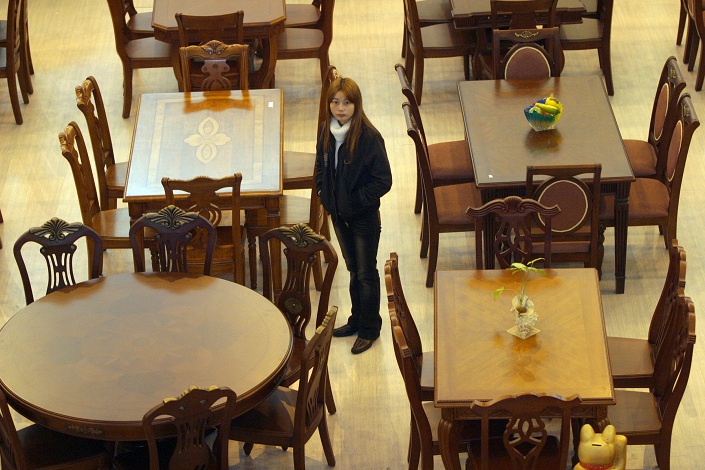 A shopper looks at dining table sets at a furniture exhibition center in the southern city of Lecong. Photo: Bloomberg

(Bloomberg) — While Chinese furniture shares are looking cheap, uncertainties over China’s ties with the U.S. and the outlook for the domestic property market are keeping investors away.

Major listed manufacturers such as Jason Furniture Hangzhou Co. Ltd. and Yihua Lifestyle Technology Co. Ltd. have seen an average of about 40% decline in their stock prices over the past year. The export-oriented sector suffered another round of sell-offs recently amid escalating tensions between the world’s two largest economies.

Jason Furniture, a major Chinese listed furniture-maker and a favorite of foreign investors, is trading at its lowest earnings multiple since listing in 2016. As of Thursday’s close, it had fallen 36% from the start of April, more than the roughly 11% decline in the broader market. Foreign investors have pared their holdings in the company to 14% from 22% at the end of 2018. The stock was down 2% in Monday morning trade, against a 0.5% rally in the CSI 300 Index.

Still, it’s too early to go bargain hunting in the highly fragmented sector yet, say some analysts, who cite a slowdown in the domestic property market and recent hikes in U.S. tariffs on 5,700 different product categories from China ranging from vegetables to furniture.

China is the world’s largest consumer and exporter of furniture. Its exports of soft furnishings — an industry term for items like beds and sofas — more than doubled over nine years to $12.6 billion in 2017, according to a report by Jason Furniture that cited industry data. About 37% of the country’s soft furnishings products were shipped abroad that year.

Many listed furniture firms rely heavily on overseas markets, especially the U.S. Jason Furniture derived 40% of its sales from overseas last year, according to data compiled by Bloomberg. Founder Securities’ Xu estimated that up to 70% of its overseas sales came from the U.S.

Other Chinese manufacturers are also heavily dependent on exports. Zoy Home Furnishing Co. Ltd. exported nearly all of its products in 2017, while Yihua relied on overseas markets for three-quarters of its sales. Yotrio Group Co. Ltd. booked 87% of its revenue from overseas in 2017, and nearly 47% of its total sales came from North America.

To dodge higher U.S. tariffs, some firms like Jason Furniture and Xilinmen Furniture Co. Ltd. have started to build plants abroad. Jason is “preparing to build factories overseas in reaction to the trade war between China and the U.S.,” the company said in its annual report in April. Xilinmen is constructing a facility in Thailand for exports.

A slowdown in China’s property market following years of breakneck growth doesn’t bode well for furniture companies either, at least for the short term. Home-building activity in China may decline this year for the first time in more than two decades as developers saddled with debt they’re struggling to service dial back construction, according to a report released last month by state-run think tank the Chinese Academy of Social Sciences.

“Furniture stocks are heavily related to real estate cycles,” said Fu Gang, fund manager at River East Asset Management Advisory Ltd. “Investors are skeptical about the outlook for property sales so they are also unsure about the growth potential of the industry.”

Still, Founder Securities’ Xu says he’s upbeat about sector leaders such as Jason Furniture over the long term as the trade war with the U.S. should drive consolidation of the bigger companies.