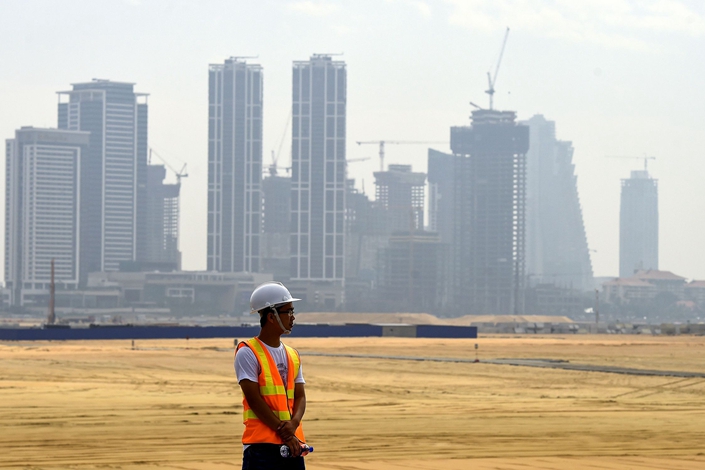 A Chinese laborer looks on at a construction site of a Chinese-funded $1.4 billion land reclamation project in Colombo on Jan. 16, 2019. Photo: VCG

(AFR) — Australian companies are being penalized by the federal government's refusal to sign up to Chinese President Xi Jinping's $1 trillion Belt and Road Initiative.

Deloitte China's Belt and Road leader Derek Lai said the direct cost of Australia's refusal to sign up may not be easy to quantify, but it impacted sectors including international education, tourism, the digital economy and general trade and investment.

The warning comes as Chinese visitor numbers to Australia have hit a wall with the growth in tourism numbers slowing over the past three months.

“If you sign the MOU there is a different perception by the Chinese companies,” Mr Lai told The Australian Financial Review’s National Infrastructure Summit in Melbourne on Wednesday.

“If you sign or not sign it may not affect directly but for Chinese companies it would be practically much easier to get the money out,” he said.

“From the Chinese perspective, it would be a lot easier for the Australian companies if we signed up,” he said. "It's difficult to quantify the direct benefit of signing up but there a lot of side benefits including students, digital, trade.”

“People's perception is that this is a country that really welcomes us compared to the United States,” Mr Lai told the Summit.

The West Australian state government has this week shut down suggestions it would move to join the Belt and Road deal after warnings from Canberra but has called on Australian Prime Minister Scott Morrison to do more to mend relations with China.

The premier of Victoria, Daniel Andrews, also came under fire from Morrison last year for undermining the nation's foreign policy, after the southern Australian state went it alone in signing up to the multibillion-dollar program.

The costs are clearly political costs, he said, in terms of how the United States and others perceive Australia's actions.

Critics claim the Belt and Road is geopolitical tool and a form of coercive “debt-trap diplomacy” to exert control over the countries that join its transnational infrastructure investment scheme.

Professor Bisley said that criticism was real but the benefits were worth the political cost.

“Belt and Road is and will remain a deeply political project,” he said. “What they are trying to do in their immediate periphery is harmonize the political and economic interests of those societies.

“That is not to say you can't make money from them or you should stay away from them.

“There are no hidden strings or gotcha moment unless you think about what the US, Japan and others think of what you do.

“But we can't not do business with these people. In doing what Victoria has done they have sent a message that relationship is really important and that is not a bad thing.”

Jayne Whitney, chief strategy officer at Australian engineering contractor John Holland, said there were already significant benefits for Australian companies from Chinese investment and currently there was not much capacity for Australian firms to take on more work on Belt and Road projects.

“I’m not sure Australia could cope with a lot more honestly,” she said. “With that comes the challenges around skills shortages and engineers.”

All three China experts agreed the Chinese government was getting better at soft diplomacy after changing the project's name from One Belt, One Road to the Belt and Road Initiative.

“China is learning to do the game of public diplomacy,” Professor Bisley said.

“China has realised you need to be more co-operative, more inclusive and more open-minded.”