The Hidden Gems of China’s ‘Dalifornia’ 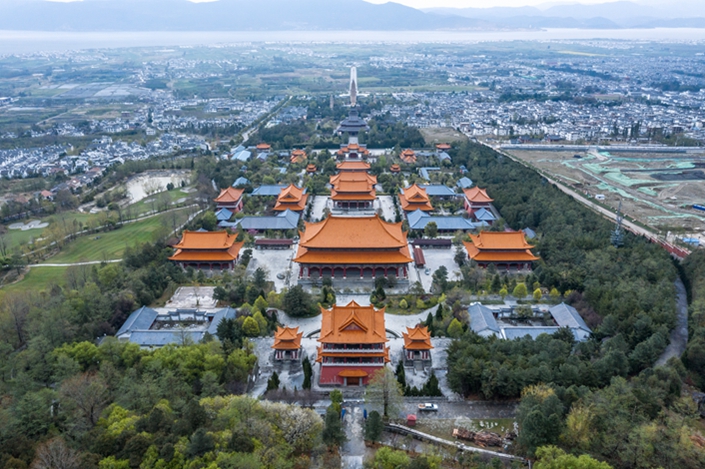 The Chongsheng Three Pagodas in Dali are seen from the air on March 27, 2019. Photo: VCG

I once hated Dali.

Growing up in the foothills of the eastern Himalayas in Yunnan, southwest China, I couldn’t wait to get out of there.

The weather is always perfect. Flowers bloom year round. Fields churn out celery, cilantro and rice nonstop. People spend their time loitering on slate-covered streets, drinking tea under banyan trees, or simply basking in the sun during what passes for winter there. The phrase “shai taiyang” meaning “being exposed to the sun” is an acceptable answer to the question，“What are you up to?”

As a ten-year-old, I wondered if people living in temperate Dali could amount to anything. Look at Genghis Khan! Fearless warriors are tempered in howling winds and skin-lacerating storms. I thought Dali people only cared about whether the porcini was foraged from the mountains the night before; or whether the ham was aged for three years or one.

Country pumpkins, I labeled my people. It should be “country bumpkin” not pumpkin, I was later told. But I think pumpkin is more fitting. Round without edges, content and sweet.

But when I returned years later I found Dali and its people irresistible.

Dali’s lifestyle has become trendy. The residents’ way of loitering around and drinking tea could easily fit with the “slow living” philosophy. Their fussiness about fresh produce would be chic in California, with its passion for “farm to table” restaurants.

I am not the only one who finds Dali attractive. A new crop of eco-migrants from Beijing and Shanghai, mainly young professionals working in IT, design or advertising have also made Dali their new home, escaping smog and high pressure. They call themselves the “new Dali people.”

It has also gained a nickname — Dalifornia.

But success has its pitfalls. Local government officials proudly told me that the city boasts 20 million visitors a year. I realized why some recent tourists have told me they didn’t have a good time.

With crowds flocking to the city, your experience really depends on what you choose to do. I thought I would share a few of the city’s secrets, to help you experience Dali in a less touristy way that can reveal its charm.

The classic tourist spots are Cangshan Mountain, soaring 4,100 meters (13,450 feet) skyward, and the ear-shaped Erhai Lake. These are must-visits, but beyond them, it’s most important to experience the local Bai ethnic minority’s culture.

Here’s my list of the top things to do.

Take a hike – not just a cable car – on Cangshan Mountain

There are three cable-car routes going up the mountain, and there is a path connecting all of them in the middle. Most tourists choose to take cable cars up for the scenery, so the areas around the car stations can be crowded. But if you are willing to explore a little, you’ll be rewarded with stunning scenery and a pristine environment.

You can start the hike either from the southern end after travelling by cable car up to Gantongsi station, or from the northern end at Zhonghesi station. The path that connects these two cable car stations is called the Jade Belt Path, and measures 11.2 kilometers (7 miles). It is at a reasonable elevation of 2,500 meters, and it’s flat, making the hike feasible for most people. For those wishing for a quicker escape, the middle cable car has a mid-station that connects to the path as well. You can offload there.

One good thing is that with a round trip ticket, you can offload on any of the three cable cars. But ticket prices vary. Zhonghesi is the cheapest at 95 yuan ($13). Gantongsi is 40 yuan more.

The middle cable car is the only one that has a second station further up the mountain, ending near a small pond called Horse Washing Pond. There is a loop path at the mountaintop, with good views of the lake and the rhododendron bushes.

Bring a picnic lunch and a water bottle. There are shops at the cable car stations that sell tea as well.

The local Bai people believe in the Bon religion, which blends the practices of Daoism, Buddhism as well as shamanism. They believe in all sorts of gods and make sacrifices on religious holidays, for weddings and during funerals. Basically, any event is a reason for worship.

Jiangjundong Temple is tucked away on Cangshan Mountain, but is little visited by tourists. You can hire a taxi from town to reach Jiangjundong in 20 minutes. Ask the driver to wait for you and walk around the temple for an hour by yourself.

I always marvel at what’s being sacrificed. On one occasion, some local women were holding a serving platter with a whole boiled chicken on top. A large cleaver had been stuck into the back of the chicken and there was a 100 yuan note folded into its beak. I asked them about the meaning of the offering. No one really offered me a thorough explanation, besides “it brings good luck.”

You don’t go there to buy bedding. The Sheet Factory is the new artsy compound in Dali’s old town. It’s in the southeast corner inside the city walls, within easy walking or biking distance if you stay inside the old town. In its previous incarnation, it really was a sheet factory, until a developer modeled it on Beijing’s 798 art district. It is of a smaller scale than its cousin in the capital, but has a similar feel.

Across its three stories, you can wander into various small shops, such as a handmade leather goods shop, a bookstore and a terrific little coffee shop with tasty cookies which are all on its second floor.

You never know what you’ll find, but it’s always worth the time it takes to stroll around.

Enjoy Erhai Lake from the dock, not on a cruise

Part of Dali’s charm is the meticulously farmed fields between the old town and the lake. If you walk or run from the old town to watch the sunrise by the lake, you’ll go by quiet fields at their most beautiful. The sunrise over the lake is stunning.

The best place to watch the sunrise is Longkan Dock. During the day, this is where tour buses park as tourists get onto large cruise ships. You should avoid the touristy lake cruises at all costs. But beyond the parking lot, there is a platform that stretches out into the lake. At the early hours before sunrise, this is the best place to be.

Check the weather before you go. Also bring your smartphone and a camera. Sometimes in winter, it can be quite cold at that hour, so I often bring a thermos and a mug for tea or coffee to warm my hands while waiting for the sun to peek over the horizon.

Dali’s South Gate is perhaps its the most iconic sight. Although it’s relatively new, it’s frequently photographed and sometimes appears in movies. To skip the ever-present crowds, go a little bit further east to the temple less than half a kilometer way.

Chenghuangmiao temple is also dedicated to local gods. An interesting feature is that there are often elderly men sitting in front of the temple who offer an important service — customizing your offerings. They do so with an ink brush, and write your prayers on colorful pieces of paper that feature block prints. You can buy safety for your new car, or prosperity for your new house, or health for your parents. Next time I go, I will buy one for my new peach tree.

The block prints are done by hand at their homes in nearby villages. I think a gift of a few hundred yuan could persuade them to let you visit their homes, to see both how they practice their craft and to get a glimpse of the local lifestyle out of the sight of most visitors.