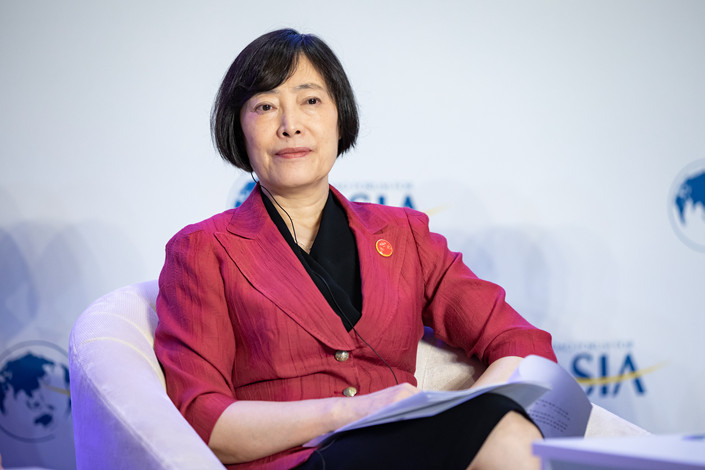 China has continued to push forward the Belt and Road Initiative, which aims to enhance trade links across Asia and Europe, despite allegations some of its investments have created a “debt trap” situation in some nations. In response to these concerns, the government says it has been reexamining its strategy and paying greater attention to sustainability in its cooperation with other nations. The Export-Import Bank of China is a state-owned policy bank that has played a significant part in the initiative so far. Chairwoman Hu Xiaolian spoke with Caixin recently about the bank’s shifting role and how China’ s financial institutions can work with international commercial banks to improve the financing of the initiative’s projects.

Caixin: The Belt and Road Initiative is supposed to be open and inclusive, not a Chinese solo mission. What measures do you think should be taken to promote openness and inclusiveness?

Hu: President Xi Jinping once brought up the principles of “extensive consultation, joint contribution and shared benefits” in pushing forward the Belt and Road Initiative. The Belt and Road Initiative is a platform for China’s participation in global cooperation aimed at a shared future. So we need to be more open and inclusive. For example, previously, the projects funded by the Export-Import Bank were handled by Chinese enterprises. In the future, we can also consider opening up the projects to international bidders, in order to improve the quality of the projects.

China’s Government Work Report this year talked about “expanding third-party market cooperation” in the Belt and Road Initiative. Which aspects do you think China can start with?

Both China’s financial institutions and enterprises should join hands with international partners with corresponding advantages in certain areas. The Export-Import Bank of China actively co-finances with major international financial organizations. For example, we cooperated with Credit Suisse to provide loan support for MTN Nigeria’s telecommunications projects. We cooperated with the Export-Import Bank of Korea, the Italian export credit agency SACE, the French trade insurance firm Coface and other companies to provide syndicated loans for a Mozambique liquid natural gas project. Through this kind of international cooperation, we have not only expanded the supply of funds, but also shared information and experience with international partners, while learning from their advanced management practices.

President Xi Jinping said at the second Belt and Road Forum in April that China needs to help participating countries build affordable, durable and high-quality infrastructure projects to promote greater interconnection. This actually puts higher demands on Chinese companies and financial institutions. How can these goals be achieved?

President Xi once pointed out that the Silk Road must first have a road in order to facilitate the flow of people and goods. Infrastructure interconnection is the basis for BRI cooperation. At present, nearly 50% of the Export-Import Bank’s BRI-related loans go to interconnection projects, mainly in the areas of railway, electric power, and highways.

While Chinese companies are actively joining the initiative to go out, we also need to avoid short-sighted behavior such investing blindly without accurate risk assessment, and competing without following rules.

To avoid such behavior, better plans for projects’ full cycles are needed, making sure projects match the economic realities of those countries. At the project evaluation stage, financial institutions can play a bigger role in independent evaluation in order to realize the commercial sustainability of the projects. At the design and implementation phase, the projects should operate according to high standards. It is also necessary to mobilize the participation of social capital.

We learned that some projects have been completed, but problems followed in operating these projects. How to ensure that these projects are built well, run well, and create sustainable benefits?

I believe that the “investment, construction and operation” integration model is a good solution. In the past, enterprises went out to build projects and then handed them over to local owners to operate and manage. However, if local owners had no experience in project operation, problems may occur.

The Chinese enterprises can participate in a part of the investment, and get involved in the long-term benefits of the project. The Chinese enterprises must not only complete the construction, but also participate in the operation and maintenance of the projects to generate stable cash flow. The new model can not only reduce project owners’ debt pressure, but also bring long-term economic benefits to the construction enterprises, project owners and host countries.

Some foreign media reported that the Belt and Road Initiative has caused “debt traps” for the countries along the trade routes. How do you view this issue?

Many of the participants in the Belt and Road are developing countries with poor infrastructure and huge funding gaps, which seriously restrict their economic and social development. We actively meet these countries’ needs by investing in infrastructure construction, including electricity, transportation and communications. These investments will break the economic bottlenecks and improve people’s lives in the long term. Local people have been welcoming these investments.

The Grochma Bridge in Cambodia funded by the Export-Import Bank of China, for example, is a dream bridge for locals, despite its length of only 1,131 meters (3,710 feet). For them, the bridge means they can save a ferry fare every time they cross the river. It also means a shorter travel time and higher living standards.

The Sihanoukville Special Economic Zone in Cambodia was once a wasteland with no fresh water, no electricity, no roads and no people. With the support of Chinese banks, the park has been developed, and more than 100 enterprises have come, creating over 20,000 jobs for local people. It has become an industrial park with complete production and living facilities in Cambodia. The industrial development in the park will drive local economic growth and enhance their debt solvency capability.

For general commercial projects, financial institutions should independently evaluate the risks and benefits according to market principles. They should rely mainly on the benefits generated from the project to provide repayment guarantees, and reduce the dependence on official loans and guarantees.