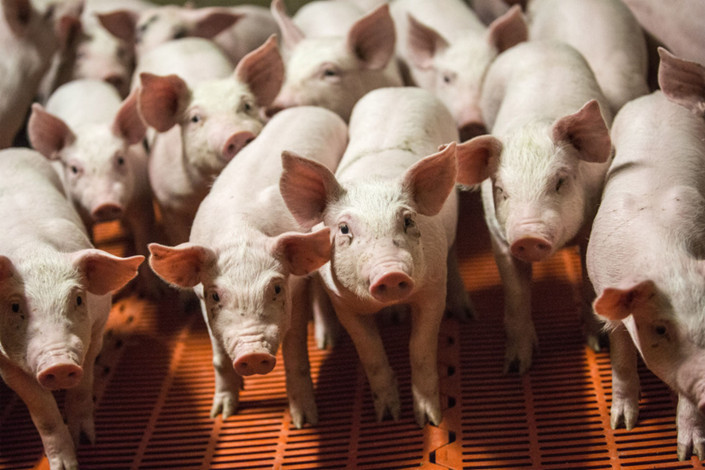 Prices in the EU, the top pork exporter, have fared better than in rivals due to a tighter market. Photo: Bloomberg

(Bloomberg) — Europe’s pig farmers are becoming some of the biggest winners from Asia’s hog crisis.

Top pork consumer China and its neighbors are gobbling up supplies from abroad as the deadly African swine fever virus ravages their own herds and causes millions of pigs to be culled. That has pushed prices in the EU, which supplies more than half of China’s imports, to a five-year high.

The gains have also come as the Asian nation maintains tariffs on U.S. supplies and recently suspended shipments from Canada, boosting the appeal of meat from rival producers. That means Europe should benefit for a while yet.

“We see China increasing its demand for imports in the back half of the year,” said Justin Sherrard, global animal protein strategist at Rabobank. “At the moment, it looks like the EU is best placed to capitalize on that.”

EU pork exports are already surging, with sales to China jumping 37% in the first four months of 2019, the latest data show. First-quarter shipments to Vietnam — another nation grappling with the disease — almost doubled. The U.S. government pegs EU exports at a record 3.25 million tons this year, and EU farmgate pig prices have risen 29% in 2019.

Prices in the EU, the top pork exporter, have fared better than in rivals due to a tighter market. Chicago hog futures eased recently as American exports proved tepid amid excess supplies. Also, Canadian meat has been blocked from China because of counterfeit health certificates, though Canada’s trade minister suggested the controversial shipment may have come from elsewhere.

More exports are a boon for meatpackers like Tulip Ltd., Britain’s biggest pork processor. Two of its four plants can ship pork to China, and the others may gain approval this year, said Mike Wijnberg, group technical director.

High on the hog

The increased sales are reducing frozen inventories, benefiting U.K. prices that had been pressured from stockpiles built up to buffer against potential Brexit trade disruptions. “There was a logjam until two or three months ago,” Wijnberg said. “That’s now been cleared.”

But the crisis engulfing Asia’s hog industry shows just how vulnerable Europe may be if the bloc’s own outbreaks spread. There have been hundreds of cases in wild boars in southern Belgium since 2018, and the virus has been in Eastern Europe for years. It recently struck a Polish farm with about 8,000 pigs.

Countries including France and Denmark are building fences to curb any spread and Germany, the EU’s top pork producer, said it’s working with China to ensure exports remain possible in the event of an outbreak.

“The EU is in a great spot right now” in terms of supplying Asia, said Brett Stuart, president of consultant Global AgriTrends. Still, “it’s a very tenuous situation. It’s one thing to have ASF in your wild boars, but if it starts hitting farms in Europe, that’s much more concerning.”

For now, the pork industry is seeing an “unprecedented recovery,” and prices should rise further this summer, according to top EU processor Danish Crown. The company’s sales to China from Denmark and Germany roughly doubled in April and May from a year earlier, Global Sales Director Lars Albertsen said.

“We’d expected the prices to get a little better this year, but not as good as we see now,” said Henrik Refslund Hansen, who raises about 17,000 pigs a year in Stanst, Denmark. “So much meat is coming out of the market.”