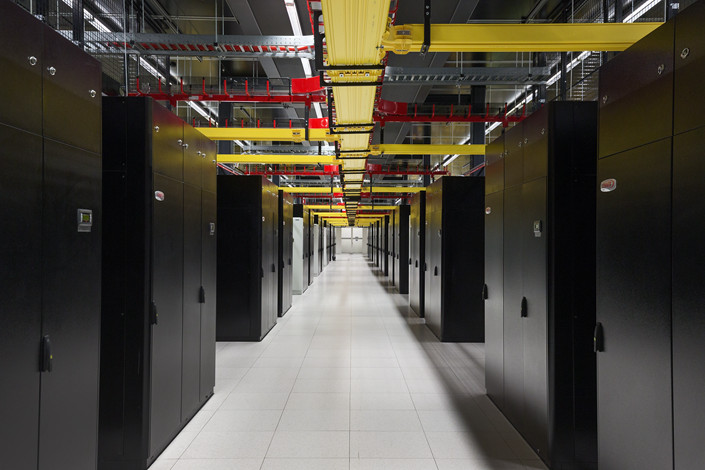 An Equinix data center in Amsterdam. GIC is entering a joint venture with the company in Europe. Photo: IC Photo

While it has managed to keep its relevant rate of real returns from falling, it warned in its latest report that the investment landscape continues to point to low and volatile returns, with the case for investor caution remaining strong.

GIC also said it was taking care not to overpay for assets.

In its report, it said that its benchmark 20-year annualized rate of return remained at 3.4% above global inflation.

But the world's eighth-largest sovereign wealth fund — with $390 billion in assets under management, according to the Sovereign Wealth Fund Institute — expects this rate to be weighed down in the medium term, in part because the dot-com boom of the late 1990s will fall out of its 20-year window.

GIC's 20-year rolling real return has been below 4% for the last three years as well, although chief executive Lim Chow Kiat said yesterday that it is hard to predict what figures will look like, going forward.

"Because of the high valuations and this range of uncertainty, we are cautious about the investment prospects," he said, referring to how GIC is observing high-risk asset valuations that mask weak market fundamentals.

Tensions between the United States and China are among concerns informing the GIC's cautious view, Lim said.

"It is not a short-term issue that goes away (and) because of that, we have maintained a more defensive portfolio position."

GIC has reduced its allocation to developed market equities, which stands at 19% as at March 31.

This is down from 23% in the previous year.

In its report, GIC outlined how global growth will likely remain subdued, while political and policy uncertainties remain high.

Structural tensions are likely to continue as well, involving rising income inequality, populism and job displacements due to technology.

"As we face a low-growth and increasingly uncertain world, we will rely even more on our long-term investment approach and global network of partnerships," said Lim.

GIC group chief investment officer Jeffrey Jaensubhakij added: "One of the things we are most concerned about is the potential permanent loss, or permanent impairment, to investments."

One way GIC is avoiding this is by maintaining strong price discipline and not overpaying for assets.

But beyond that, Jaensubhakij said there remain areas which have long-term potential for growth.

For example, GIC announced on Monday that it was entering into a joint venture with data center company Equinix to acquire and develop six hyperscale data centers in Europe for more than $1 billion.

“The proliferation of data-gathering and processing... is a growth that will not be impeded by the trade war,” he said.

Similarly, GIC and Canada's Brookfield Asset Management's recent agreement to acquire U.S. freight railway owner Genesee & Wyoming for about US$6.4 billion is also an investment unlikely to see large disruptions from U.S.-China trade tensions, he noted. The railway, he added, is focused on the internal U.S. domestic economy.

Lim highlighted that companies which do not respond to technological disruptions are the ones that will be “very susceptible to permanent impairment.”

The financial sector, for instance, has seen fintech startups looking to replace the incumbents rather than simply sell products to them, as they did in the 1990s.

Lim said: "Incumbents are not necessarily disadvantaged, provided they have the mindset that the traditional mode (of business) may no longer be that much of a barrier for competition."