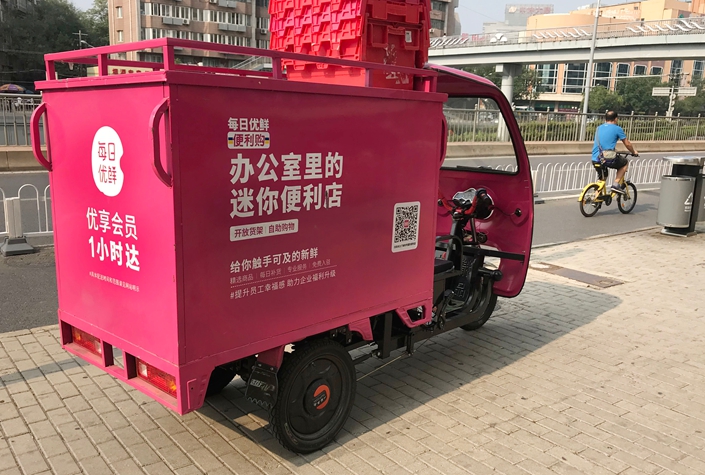 A delivery vehicle of Chinese fresh food startup Miss Fresh is parked on a road in Beijing on Sept. 14. Photo: IC Photo

Beijing Missfresh Ecommerce Co., which also counts Goldman Sachs Group Inc. and Tiger Global Management as backers, is looking to fetch a valuation of at least $3 billion, the people familiar said, requesting not to be named because the matter is private. The company plans to raise $300 million to $500 million at a valuation of as much as $4 billion, one of the people said.

The plans are preliminary and subject to change, the people added. Missfresh declined to comment about the fundraising details in a text statement.

A slew of Chinese startups are racing to replenish their war chests before what many foresee as painful times brought on by a slowing economy and market uncertainties unleashed by the trade war. Missfresh — born out of an unprecedented tech boom in China — is competing in a sector of heavy cash burn that has attracted titans including Alibaba Group Holding Ltd.

The five-year-old company has more than 1,500 mini-warehouses that promise deliveries as fast as within one hour, it said in a statement. Missfresh had nearly 25 million monthly active users as of May. It handled 10 billion yuan ($1.5 billion) worth of transactions last year and had generated positive cash flow by the end of 2018, the company said in a statement.

If Missfresh’s attempts at fundraising are successful, it could help the company prepare for testing times. Venture deals in China tumbled 77% to $9.4 billion in the second quarter from a year earlier, while the number of deals roughly halved to 692, according to the market research firm Preqin. The second quarter of 2018 marked a peak for China venture deals with a total of $41.3 billion invested, it estimated.

After eight rounds of fundraising to date, Beijing-based Missfresh has raised a total of nearly $900 million from investors including Jeneration Capital and Genesis Capital, the company said.