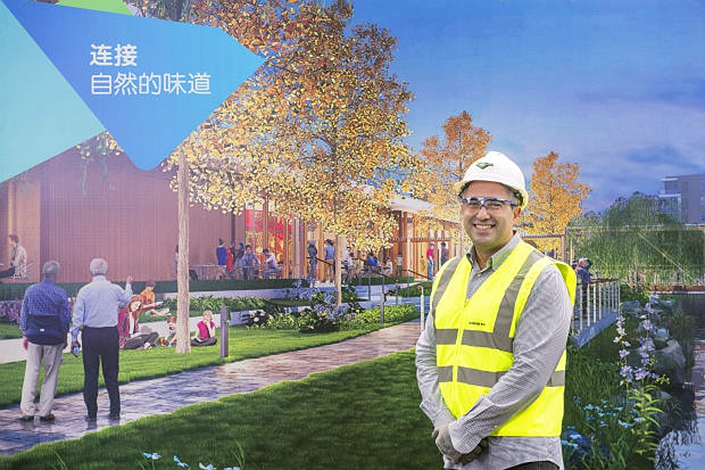 Lendlease's Tony Lombardo in front of a render of the retirement village. Photo: AFR

(AFR) — Australian property developer Lendlease has plans to build AU$2 billion ($1.4 billion) or more worth of new retirement villages in China over the next five years if a pilot program to tap into the country's booming aged care sector being launched in Shanghai this week takes off.

Lendlease chief executive Steve McCann and other senior executives unveiled the Australian company's first “Senior Living” project on Monday. The construction of more than 850 low-rise apartments worth AU$400 million is the first phase of the company's plans to make aged care in China a significant part of its large international operations.

Lendlease is one of the first foreign companies to break into China's aged care sector without a local partner. It signed a deal to build the retirement village in a heritage water town on the outskirts of Shanghai last year.

It started marketing the development, known as Ardor Gardens, this week and said it expected 1300 residents to move in from 2021.

Lendlease Asia boss Tony Lombardo said he wanted to win another four to five big projects in China. He said there was potential for Lendlease to build between 5000 and 10,000 senior living units in China in the next five to six years.

"The acceleration and aging of the population is going to have a dramatic effect over the next decade. We have been working with government and we have been refining the product in the last 12 months. We are now getting ready to showcase that," Lombardo told The Australian Financial Review.

Lendlease says Chinese government policy changes which encourage a percentage of the elderly to live in private care rather than with extended family — which is the traditional approach in China — mean demand will continue to rise.

Lendlease signed a 50-year land usage contract with the Qingpu government. There are few foreign companies setting up 100% owned ventures in China, where partnering with local companies is the most common approach.

China and Australia agreed to cooperate more closely on aged care as part of the China–Australia Free Trade Agreement. Lombardo said Lendlease was talking to other district governments about additional projects and diplomatic tensions between the two countries had not been a problem.

"For us it is business as normal. We are talking to other districts about other projects for us to secure. The district governments we are talking to are very welcoming and open to foreign investment."

Lendlease has worked on 300 projects in China, many of them plants and buildings for multinational clients such as Coca-Cola and Macquarie, but it is the first time it has launched an aged care project.

The development "end value" is about $400 million and residents can purchase transferable, long-term membership rights for an apartment at around AU$400,000. Lendlease will own and control the site for 50 years. Foreign companies in China need to obtain a specific entitlement from district government authorities to allow them to use the land for retirement living.

The soft launch for the project will take place by November, with the first phase of marketing kicking off around Lunar New Year in January. The project includes 22 low-rise apartment buildings. Lendlease said the project was more focused on nature, health and wellbeing and would have a more "homey" feel than many local retirement villages.

"We will bring our international standard to what we think the product will be from Australia, but we will make sure we are listening to the customers," he said.

It was hiring workers from the hospitality industry to provide a concierge service and health and wellbeing services.

Shanghai's population of people aged over 60 is 4.5 million. That is forecast to rise to 6.1 million by 2021, Lombardo said.

China's one-child policy meant many modern families only had one couple looking after two sets of grandparents.

"When we talk to seniors, they say they don't want to be a burden on their children."