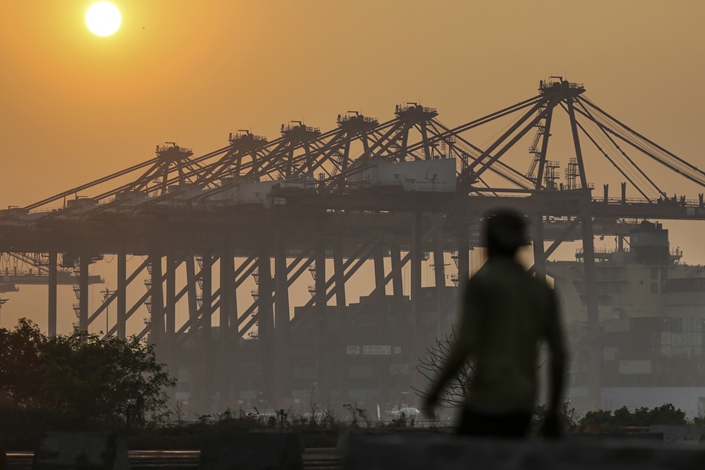 (Bloomberg) — The imbalances that lie behind trade tensions are now concentrated in rich countries, and tariffs aren’t doing much to fix them, the International Monetary Fund said.

China, which a decade ago was running the world’s biggest current-account surplus, is now close to balanced trade that’s “in line with the fundamentals,” the IMF said in its annual study of how economies interact with each other. The largest surpluses and deficits are now mostly found in developed countries like Germany and the U.S.

The finding is at odds with the Trump administration’s insistence that China is distorting global commerce — a claim often advanced in support of the trade war that’s alarmed financial markets.

That contest between the world’s two biggest economies is in a lull for now as talks resume. But the risks remain apparent.

This week, China posted its slowest economic growth since at least 1992. In the U.S., the Federal Reserve points to the trade-war fallout as the main reason why it’s set to cut interest rates for the first time in a decade.

The IMF said that attempts to address trade imbalances by taxing imports are hurting the world economy without fixing the problem.

But the Fund’s study did contain some support for Trump’s side-campaign against Europe.

The IMF measured how far the world’s economies depart from balanced trade, in which a country’s imports are equal to its exports. It found that the figure “inched down” to about 3% of global GDP last year — well below the peaks reached before the 2008 financial crisis, though still substantially bigger than in the 1990s.

What’s changed is the geography.

China’s record surplus has largely disappeared, and the biggest such imbalances are now found in developed countries — like the export-oriented economies of Germany and the Netherlands, as well as South Korea.

Trump has blamed Europe for keeping its currency artificially weak to boost exports, and threatened to tax cars imported from the European Union.

Among deficit countries, the Fund pointed to persistent trade gaps run by the U.S. and U.K.

“Greater urgency is needed” to address them, the IMF said — but not through protectionism: “It is imperative that all countries avoid policies that distort trade.’’

Instead, it said the deficit countries need a mix of measures to boost the skills of workers and make labor markets more flexible — while surplus countries like Germany should spend more public money on things like infrastructure.

The IMF isn’t recommending that all countries should always aspire to perfectly balanced trade. It says there are often good reasons they might wish to run deficits or surpluses.

But it calculates that more of than a third of the existing ones — equivalent to some 1.2% of world GDP — qualify as “excessive,” meaning that they’re bigger than required for the economy to match its potential in the longer run.