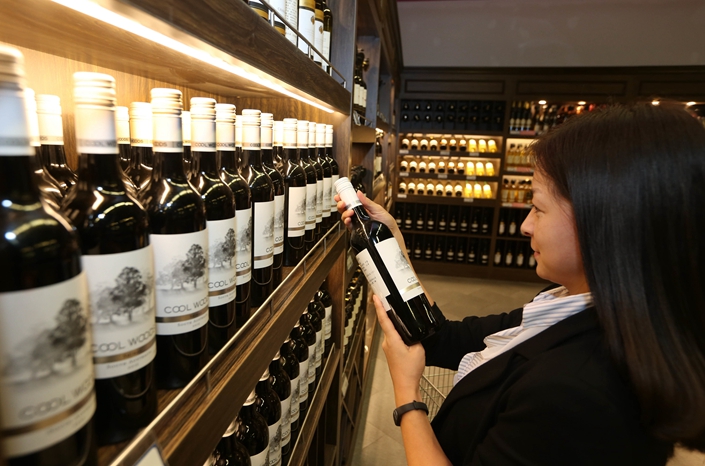 The deliberate shift to concentrating on higher-priced wines meant the total value of Australian wine sales to China increased by 7% to reach a record of $1.2 billion in the year ended June 30, industry body Wine Australia announced on Monday.

Wine Australia said U.S.-bound exports reversed a two-year downward trend to generate a 2% rise in exports by value to $432 million; the picture was bleaker in Australia's third-largest export market, the U.K., where exports slipped 3% to $373 million and volumes fell 4% to 236 million liters (62.3 million gallons).

Wine Australia chief executive Andreas Clark said Australia had been the No. 1 importer by value into China for the first five months of calendar 2019, ahead of France. It was now ranked No. 2 behind France.

He said the drop in the U.K. should be put into context, with large companies having to deal with the uncertainty of Brexit and the logistics of shipping extra quantities into the U.K. as a mitigation strategy against supply disruption.

Treasury Wine Estates owns brands including Penfolds, Wolf Blass and Wynns, and is scheduled to report its full-year results on August 15. The company said on Monday that market commentary to the Australian Securities Exchange, which it gave the last time a set of Wine Australia figures was released, had been a one-off and it wouldn't be doing it again.

A Treasury Wines spokeswoman said the company was now in blackout ahead of the results and the one-off update last time had been a deliberate move to “reinforce caution on using the Wine Australia data as a direct read-out of Treasury Wine Estate performance.”

Wine Australia's Clark said Brexit had brought some unusual challenges for Australian producers and large players had been on the front foot many months ago in getting extra product into the market to avoid being caught out by any sudden change in regulations.

He said research by IRI showed Australia was still the No. 1 player in wine sales at a retail level in Britain, with 24% market share in that segment for the year ended March 2019.

A National Vintage Report out last week showed that the 2019 grape harvest in Australia came in at 1.73 million ton, 1% below the 10-year average. This was a higher intake than many experts had been predicting after poor weather conditions in some key grape-growing regions. Average grape prices increased for the fifth consecutive year to AU$664 per ton, to hit the highest level since 2008.

The total value of Australian wine exports increased by 4% to AU$2.86 billion for the year ended June 30. But total export volumes dropped 6% to 801 million liters.

This story was originally published in the Australian Financial Review.