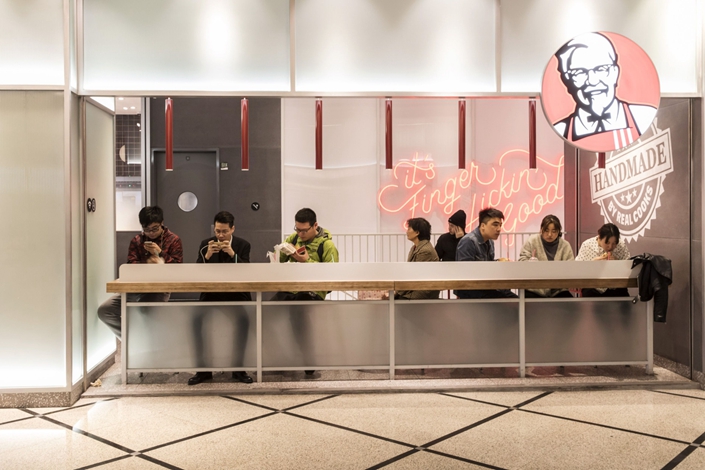 Yum China is facing higher food costs this year, especially for chicken, which weighed on margins in the quarter. Photo: Bloomberg

(Bloomberg) — Yum China Holdings Inc. plans to accelerate the opening of new locations in China as its KFC chain beat expectations by drawing in more customers with discounts and delivery. Pizza Hut sales also performed better than expected, the company reported in its second-quarter earnings.

KFC comparable sales rose 5% in the quarter, the company said Tuesday. Analysts had estimated a 3.9% gain, according to Consensus Metrix. Pizza Hut same-store sales rose 1% — higher than the 0.4% estimate and a positive sign for a chain that’s been a trouble spot for Yum China.

Shanghai-based Yum China has been trying to turn around its Pizza Hut chain with faster delivery times, remodels and new desserts to entice customers. The chain has been looking to sister brand KFC to help it grow its digital presence as well. So far it’s starting to work: it just logged its second straight same-store sales gain after four quarters of declines.

The company is facing more competition as the Chinese restaurant market gets increasingly crowded. Burger King, Tim Hortons and Starbucks Corp. are expanding quickly. But so is Yum China, which has said that expansion is a “key priority.” The company now expects 800 to 850 new locations this year across multiple brands, up from an earlier estimate of 650.

Yum China is facing higher food costs this year, especially for its key ingredient of chicken. That weighed on margins in the quarter, which were 14.7%, compared with 15.1% a year ago. The company also said it expects sales growth to moderate, as it faces comparisons with successful value campaigns that started in last year’s second half.

Yum shares climbed as much as 1.1% in late trading in New York Tuesday. The stock has gained about 22% in the past year under Chief Executive Officer Joey Wat.