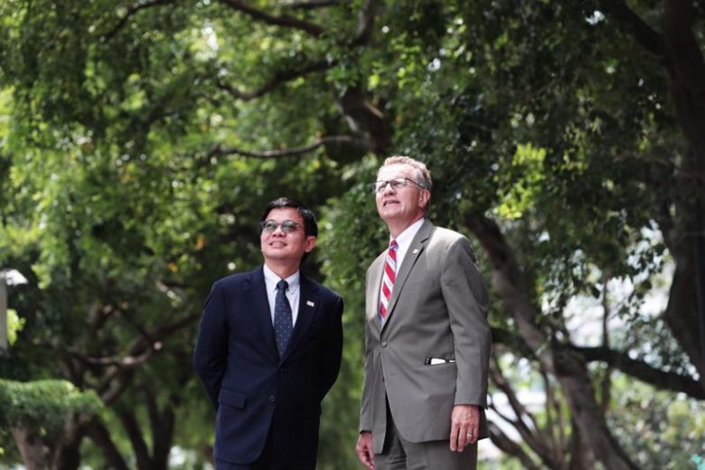 The Straits Times — The ongoing trade war has led soybean farmers in the United States to brace themselves for record-high carryout stock this year of over 1 billion bushels in leftover supply — and they are looking to new markets, as well as growth in existing ones, such as Southeast Asia, to take in the surplus.

A billion bushels translate to around 27 million tons, and this is about 10 times what a country like Indonesia would import in a year, Jim Sutter, chief executive of the U.S. Soybean Export Council (USSEC), told The Straits Times.

"It's a difficult time for U.S. soybean farmers," he added, speaking on the sidelines of the S.E. Asia U.S. Agriculture Co-operators Conference at Swissotel Merchant Court last week.

A key reason behind their troubles are a fall in exports to China, which said on Aug. 6 that its companies have stopped buying U.S. agricultural products.

This came days after U.S. President Donald Trump threatened additional 10% tariffs on $300 billion of Chinese goods. The two countries have been engaged in a tit-for-tat trade war since last year, hitting each other with tariffs covering more than $360 billion in two-way trade. This has taken its toll on U.S. soybean farmers.

Two years ago, about half of around 70 million tons a year in U.S. soy products such as beans, meal and oil, went to China, said Sutter.

But the figure is likely to drop by more than a third to about 10 million tons this year, he added.

To make up for slowing exports, the USSEC plans to grow its market share in existing markets, making sure it is supplying the most that it can to non-Chinese economies. It also wants to enter new markets.

For a start, Sutter said, Southeast Asia is already a growing market for U.S. soy exports. He expects that expanding its market share in such existing markets can help export 50% of the China shortfall by year-end.

Timothy Loh, regional director for Southeast Asia at the USSEC, said demand in this region is fuelled by its growing population and expanding middle class.

The middle class in ASEAN countries is projected to include about 350 million people by 2022, with $300 billion of disposable income to spend, according to management consulting firm Bain & Company.

"There is still so much potential because we are not even close to meeting their protein needs. The per capita consumption of meat protein is still very low across many of the countries in Southeast Asia," Loh added, noting that soybean meal is a key part of animal feed and that demand for it will rise with rising meat consumption.

In the longer term, Sutter said USSEC plans to expand in countries such as India, Pakistan and Nigeria.

It is looking into countries with large populations, low protein consumption and improving economic conditions.

Farmers are hit especially hard this year as the trade war is not the only factor weighing on exports.

Poor growing conditions in the U.S. have taken a toll on crop yield and an African swine fever outbreak in China, which is spreading to other areas, has cut overall demand, said Sutter.

But the council believes that the current difficulties are temporary.

"We're cautiously optimistic and encouraging our government ... We're optimistic that some sort of a deal will be worked out," he said of the U.S.-China conflict, although he added that it is unclear when this may happen.

"Unfortunately, we're sort of collateral damage in this overall problem. Once the trade issue is resolved to such an extent that trade in agricultural products opens up again, I think we'll see business start right away.

"Our farmers are anxious to be doing business there," he said of China.