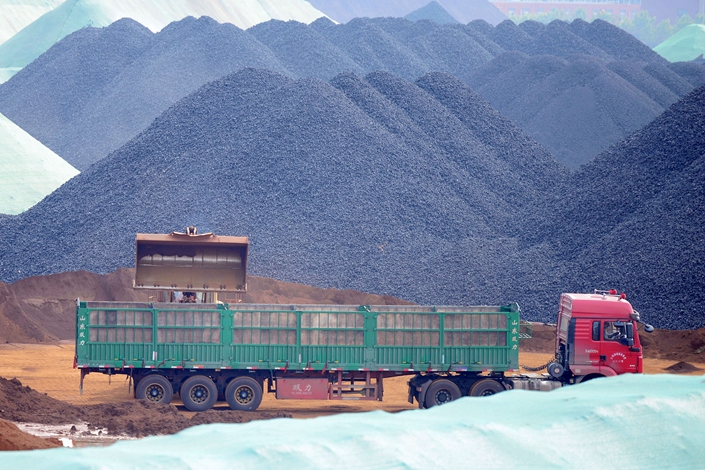 (AFR) — It’s little surprise the bear market in iron ore prices is gathering momentum and on a fast track towards $80 a ton given how Beijing loudly signals its growth concerns every time it allows the yuan to weaken.

The People’s Bank of China was back on the megaphone on Monday, steering the “fix” of the yuan weaker against the U.S. dollar for an eighth consecutive session and cementing its position above the 7 level that unleashed mayhem across global markets last week.

Miners weren’t spared, with Fortescue Metals Group pacing the declines among Australia’s iron ore trio – which includes Rio Tinto and BHP – with a fall of 4% to A$6.97 ($4.71). This adds to Fortescue’s 5% slide last week, which notched up six consecutive weeks of declines and the longest losing streak since May 2017.

Adding to a day of downbeat numbers was the latest data from Port Hedland, Australia’s major export hub for the steelmaking ingredient. About 41 million tons was exported in July, down from a record 48.9 million tons in June.

The reversal of fortunes for the iron ore industry within the space of a month has been dramatic. July’s five-year high in prices above $120 a ton seems a distant memory. The escalation of Sino-American trade war tensions and Beijing’s willful engineering of a weaker yuan has put the spotlight firmly on global growth at a time when there is a synchronized slowdown in the world’s largest economies.

Concerns about the tightness in the global market have also waned. Brazilian miner Vale, which suffered a production cut after the Brumadinho dam disaster earlier this year, is expected to ship about half of the 4% of global supply that it had sidelined by the end of the year, according to Commonwealth Bank.

China’s steel mills have been flashing a warning about their ability to sustain iron ore demand at prices well above $100 a ton for a while. Measures of profitability have fallen below zero as mills have been squeezed not only by the surge in iron ore prices but much weaker steel selling prices. There have been reports of steel traders offering sizeable discounts to shift inventories.

But with the clock ticking down until the onset of the northern winter, which usually slows down the pace of construction in China, analysts expect steel production to remain robust in coming months as builders scramble to complete projects.

The longer-term issue for investors in the big three iron ore miners is Beijing’s reshaping of the steel industry. The focus is on consolidating and modernizing the industry, with a focus on lowering its environmental impact. But production growth has been rising, thereby complicating plans to upgrade existing capacity and elevating the risks of overcapacity.

Policymakers are trying to assert their authority, with China’s Ministry of Industry and Information Technology and the National Development and Reform Commission meeting on July 31 to discuss the industry’s capacity replacement plans at a time when margins and cash flows are under pressure. JPMorgan says there about 200 million tons of replacement capacity projects have been announced in recent years, compared with China’s total steel capacity of about 1 billion tons.

The challenge for investors is trying to translate what the decline in prices means for the bottom lines of BHP, Rio Tinto and Fortescue. The tiered approach to how miners price iron ore means they have very little exposure to the spot price. For example, Rio Tinto priced approximately 68% of its sales with reference to the current month average index in its 2018 financial year. Only about 10% were priced on the spot market.

But it’s worth remembering that Treasury’s sensitivity analysis shows a $10-a-ton decline in the iron ore price would crimp gross domestic product by A$6.3 billion in 2019-20 and A$13.6 billion in 2020-21. Hardly small dollars

This story was originally published by the Australian Financial Review. To read the original, click here