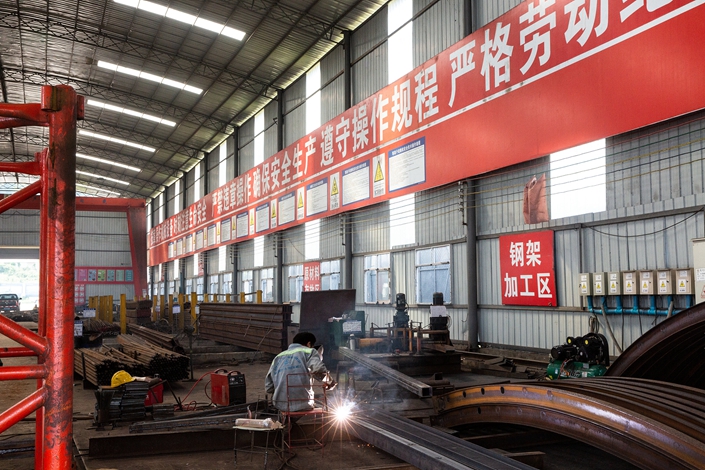 A steelworker works in a warehouse near the Luang Prabang railway bridge in Laos, one part of the China-Laos Railway being built by China Railway Group Ltd., on Oct. 21, 2018. Photo: VCG

(The Straits Times) — China's Belt and Road Initiative has made a renewed push into Southeast Asia, according to a recent report.

It notes that Chinese Belt and Road investments in the region are showing signs of recovery while the trade war between the United States and China is pushing Chinese companies to relocate manufacturing facilities to Southeast Asia to escape punitive U.S. tariffs.

Chinese President Xi Jinping unveiled ambitious plans in 2013 to build a series of roads, railways, ports and industrial parks linking the country to other parts of Asia, the Middle East, Africa and Europe.

But this investment slowed sharply in the second half of last year on the back of the trade war and a “debt trap” backlash from some developing countries, including Sri Lanka, Pakistan and Malaysia, according to the report by Maybank.

While geopolitical conditions have not improved much this year, the analysts noted a jump in Chinese investments in the region.

Chinese investment and construction contracts in Southeast Asia nearly doubled to $11 billion in the first half of this year, from $5.6 billion in the second half of last year.

“Asean will likely see a stronger recovery in China's (Belt and Road) flows, as other regions push back against China investments,” the analysts added.

The U.S.-China trade war is also fueling the flow of Chinese investments into Southeast Asia as firms move parts of their supply chains to the region to circumvent the higher American tariffs.

Maybank analysts say the beneficiaries appear to be Vietnam, Thailand and Malaysia.

Total newly registered foreign direct investment from both China and Hong Kong into Vietnam surged by 200% in the first seven months of this year.

Notably, GoerTek, one of Apple's main contract manufacturers, has invested $260 million to set up a plant in Vietnam to make the popular AirPods wireless earbuds.

Tech and the digital economy form another area that is drawing Chinese money into the region, the Maybank report said.

China Global Investment Tracker noted that Chinese investment in Southeast Asia's tech sector hit $2.5 billion in the first half of this year, surpassing the amount for the whole of 2017.

Maybank analysts expect more of China's tech money will be diverted into ASEAN, given U.S. moves to raise barriers and increase scrutiny of Chinese tech investment. They noted that China's venture capital investment in ASEAN start-ups rose more than fourfold to $667 million in the first half of this year.

And the biggest Chinese venture capital firms such as Qiming Ventures and CGV Capital — backed by Alibaba, Xiaomi and Meituan-Dianping — are also opening offices in Singapore.

The development and rollout of 5G mobile networks in Southeast Asia will also see Chinese investments flowing into the region, as ASEAN is generally staying neutral and open to using Chinese telecoms equipment giant Huawei's technologies, the analysts added.