The World’s Gadget-Makers Are Splitting Along Trade War Lines 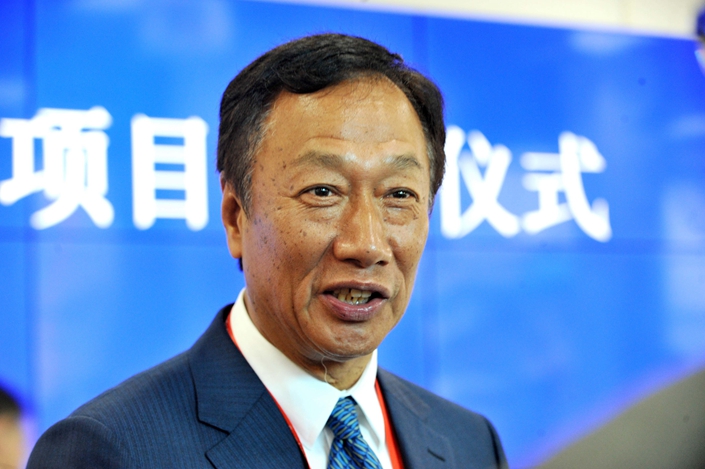 Foxconn’s billionaire founder Terry Gou, who describes the situation as “G2” — the emergence of two competing global standards created by China and the U.S. Photo: VCG

(Bloomberg) — Even the unseasonable downpour couldn’t dampen the spirits of the executives and officials gathered on the Indonesian island of Batam to cut the ribbon on a new Pegatron Corp. factory. The men exchanged jokes as they took shelter under a white canopy, and when company vice chairman Jason Cheng pledged to hire hundreds of locals, the assembled audience erupted in applause.

This low-key July ceremony to launch a manufacturing outpost marked a critical first step into Southeast Asia for one of Apple Inc.’s most important suppliers. It also encapsulates a fundamental move of electronics production, set in motion by the escalating U.S.-China trade war, that may hurt the world’s No. 2 economy while enriching Southeast Asia and beyond.

“Pegatron, and many more to come, is an opportunity,” Edy Putra Irawady, head of a local agency charged with enticing capital, told the crowd. “Batam has prepared various incentives to chase the opportunity and attract more investment.” Irawady is one of many making preparations for the most profound shift in global manufacturing since the advent of the made-in-China model in the 1980s: its potential dismantling.

Trump’s flip-flops on trade, including a backtracking just this week on threats to slap punishing tariffs on $300 billion of goods, are spurring an exodus from China of manufacturers. Some recognize that U.S.-Chinese tensions won’t fade soon, while others are just tired of the uncertainty. In one of the most dramatic responses since Trump first brandished full tariffs, HP laptop-maker Inventec Corp. declared plans to move its entire U.S.-bound laptop operations from the Chinese mainland to its home base of Taiwan within months. “The trade war is very painful for us,” President Maurice Wu said.

Like Pegatron, the makers of the world’s electronics are increasingly rushing out of the way of Trump-administration tariffs on Chinese-made goods. Server motherboard makers for Google and Amazon.com Inc. are already shifting to Taiwan. Even Apple Inc., whose gargantuan Chinese production machine hires more people than any other private employer, is testing the waters. GoerTek Inc., for one, is trying out production of AirPods in Vietnam, people familiar said. A GoerTek representative declined to comment on the specifics of its Apple business but said the company will gradually make several products in both China and Vietnam.

The U.S. president’s campaign of tariffs and export restrictions against Chinese champions like Huawei Technologies Co. threatens to up-end the production of the world’s electronics, from iPhones and laptops to 4K televisions. The decades-old supply chain is starting to split in two: one beyond China’s borders that serves American concerns, and another within the world’s most populous country that caters to local consumers.

It’s something Foxconn’s billionaire founder, Terry Gou, calls “G2” or the emergence of two competing global standards created by China and the U.S. Gou — who as Apple’s main production partner helped pioneer the made-in-China model — has volunteered to “help the U.S. reshape a new supply chain.” Young Liu, Gou’s successor, told shareholders the company could make every U.S.-bound iPhone outside of China if it had to.

While U.S.-based companies seek alternatives beyond the Chinese mainland, their counterparts in China likewise are “de-Americanizing” their supply chains, reducing their reliance on American core technology for fear they will suffer the same fate as Huawei. The company is now hunting for Asian and European component makers to reduce its dependence on U.S. firms from Google to Micron.

“Both U.S. and Chinese companies are diversifying their supply chains due to similar reasons — to mitigate geopolitical risks,” said Gordon Sun, director of the Taiwan Institute of Economic Research’s Macroeconomic Forecasting Center.

Mere months ago, it seemed as if China had a virtual lock on the business of making the world’s electronics — an arrangement that benefited not just tech juggernauts from Dell Technologies Inc. to HP Inc. but also ensured jobs for millions across the country and fostered the growth of a massive domestic manufacturing industry.

While there’s little chance that China will fully cede its mantle as the world’s electronics workshop anytime soon, the outward-bound trend is accelerating. That’s because the household names that built the technology industry’s global supply chain aren’t waiting to see how the conflict turns out.

Delta Electronics Inc., which makes power and cooling components for clients like Microsoft Corp. and Huawei, is moving some production back to its home base of Taiwan and to Thailand. It’s also taking the unusual step of building three to four plants in India, responding to Prime Minister Narendra Modi’s “Make in India” program.

Modi’s efforts to drive foreign companies to source components locally is showing success. Foxconn will start to churn out iPhones in the country this year after its print circuit board affiliate and Apple supplier Zhen Ding Technology Holding announced plans to invest there late last year. Luxshare Precision Industry Co., another Apple supplier, is considering moving some production of cables and connectors to India as well, according to people familiar, with one saying Apple made the request to the Chinese company. Calls to a number listed on the Luxshare website went unanswered and the company did not respond to an email seeking comment. Chinese smartphone brands including Huawei, Oppo and Xiaomi are all making handsets in India.

It’s not just U.S.-China tension that keeps supply chain executives up at night. Politically motivated trade protectionism may be spreading. Japanese curbs on the export of vital chip- and display-making materials to South Korea — the latest manifestation of lingering tensions stretching back to colonization by Tokyo and World War II — threaten to further splinter the industry. If unresolved, that dispute may hinder efforts to sate the enormous appetites of Samsung Electronics Co. and SK Hynix Inc., expediting a production migration from Japan.

Any shift won’t happen overnight. While moving assembly operations is unlike relocating a chip fabrication facility — arguably the most expensive type of plant at $10 billion or more to set up from scratch — the cost can run into millions of dollars and entails a plethora of issues from licenses to new regulations and hiring. That’s an additional burden that manufacturers with single-digit margins can ill afford.

“Our net profit margin stands at a mere 1.4% in the first quarter. The tariffs are 25%. We simply cannot help our customers absorb those,” Quanta Computer Chairman Barry Lam said in May when talking about potential production shift and tariff impact.