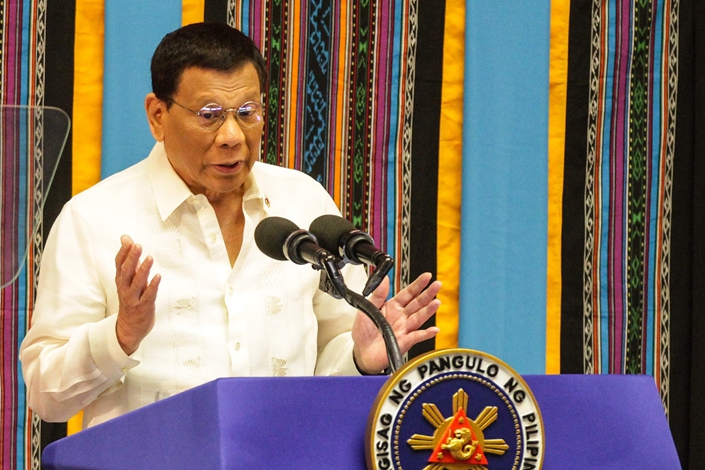 Since 2016, Philippine President Rodrigo Duterte has been awarding more permits to offshore gambling operators to bolster the sector. Photo: VCG

(Bloomberg) — China wants Philippines to stop all forms of online gambling, as it continues cracking down on a practice it says causes illegal outflow of money.

While China appreciates the move to halt the issuance of new licenses, “we hope the Philippines will go further and ban all online gambling,” China’s foreign ministry spokesman Geng Shuang said, according to the transcript of his Aug. 20 briefing posted on the website of its Philippine embassy.

The comments are the latest signal that China is mounting pressure on Southeast Asian nations in its effort to stamp out online gambling which it says causes hundreds of millions of yuan to illegally flow out of its economy. Online and phone betting has exploded in countries such as the Philippines and Cambodia over the last few years due to demand from gamblers on the Chinese mainland.

The Philippine sector regulator said on Monday that it won’t halt existing online casinos but will stop accepting applications for new licenses at least until the end of the year to review concerns about the burgeoning sector. Chinese state news agency Xinhua reported on Sunday that Cambodia’s Prime Minister Hun Sen has ordered a stop on new licenses for online gambling operations. Existing licenses won’t be renewed upon expiry, said the report.

“We hope it will further strengthen law enforcement with China and jointly tackle criminal activities including online gambling and cyber fraud,” Geng said. This will help create “peace and stability in the region,” he said and lauded Cambodia’s steps to curb the practice.

More than 50 Philippine offshore gambling operators have received licenses since 2016, after President Rodrigo Duterte started awarding more permits to bolster the sector. Revenue from the Philippines offshore gambling industry is projected to touch 9 billion pesos ($172 million) this year, according to its regulator.

“We will have to ask the president on his policy on this,” Philippines presidential spokesman Salvador Panelo told reporters Wednesday when asked about China’s request for a ban.

The industry employs about 138,000 workers, most of them from China. Earlier this month, the Chinese embassy in Manila had urged the Philippines to stop its casinos from hiring Chinese citizens.

The online casinos boom had spurred property prices and boosted consumption especially in and around Manila. The uncertainties surrounding the online gambling industry have now begun hurting property stocks, with the index tracking the performance of listed builders hitting its lowest level since March.

The online gambling centers quickly became popular since they allow wagers as low as 10 yuan ($1.4) and have round-the-clock live streams. That makes them easily accessible to lower-income Chinese in rural areas, who may not have the means to go to Macau -- the only place in China where casinos are legal.