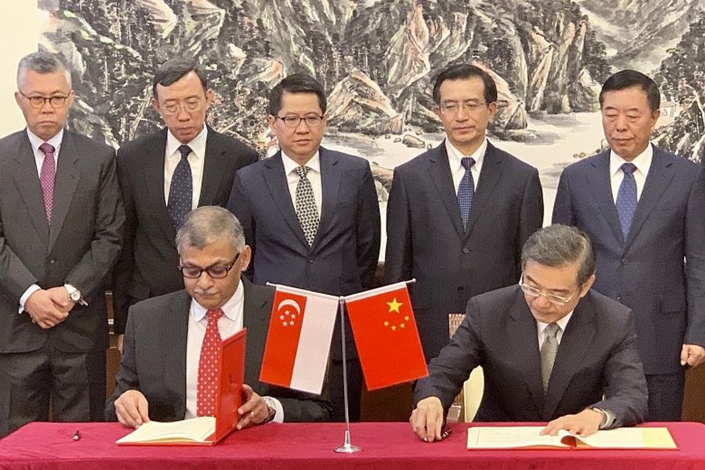 A memorandum of understanding was signed between the chief justices of the two countries on the sidelines of the Third Singapore-China Legal and Judicial Roundtable held in Beijing.

Singapore's Chief Justice Sundaresh Menon led a 13-member delegation of judges, including Justices of Appeal Steven Chong and Andrew Phang, as well as officers from the Supreme Court and the Ministry of Law for the roundtable.

The annual legal conference, started in 2017, is meant for the two countries' judiciary to exchange ideas and promote collaboration.

At yesterday's roundtable, the law authorities mainly discussed legal matters relating to China's signature Belt and Road Initiative, such as the establishment of international commercial courts that will rule on disputes arising from projects and improving training for the courts' judges.

Before the roundtable, Menon had a bilateral meeting with his Chinese counterpart Zhou Qiang.

In that meeting, the two men reaffirmed the "excellent, longstanding and multifaceted relations between Singapore and China, as well as the firm and steady progress in bilateral legal and judicial cooperation made between the Supreme Court of Singapore and the Supreme People's Court", said a statement from Singapore's Supreme Court.

Menon will meet Procurator-General of the Supreme People's Procuratorate Zhang Jun today and give a lecture at the National Judges College on settling international commercial disputes.

This article was originally published by The Straits Times. To read the original, click here.