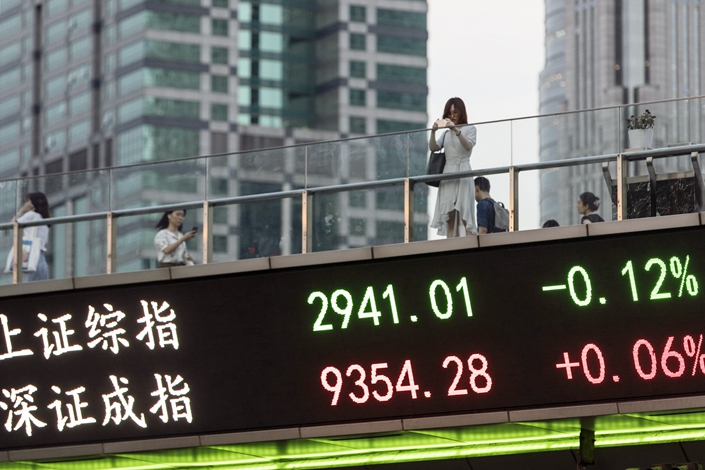 A woman takes a photograph from an elevated walkway with an electronic ticker displaying stock figures in the Pudong Lujiazui Financial District of Shanghai, on July 29. Photo: Bloomberg

(Bloomberg) — Criticism from an investor in a Chinese hedge fund has sparked controversy over a key source of income for the 2.3 trillion yuan ($322 billion) industry.

An open letter by Michelle Wang to news portal Sina.com in July outlined some unorthodox ways in which many Chinese hedge funds collect performance fees, leaving the Beijing-based lawyer paying up for a money-losing investment. Firms including Shanghai Chongyang Assets Management Co., which manages more than 20 billion yuan, and Shanghai WuSheng Investment Management Partnership have since joined the debate along with hundreds of other users.

The now months-long discussion highlights the rising scrutiny that’s coming from China’s increasingly sophisticated wealthy investors. It also comes at a time when hedge funds are already on the back foot, struggling to attract capital amid increased regulatory oversight and as performance wavers due to market volatility. Assets under management dropped by 8% in the 12 months through June 30.

At the center of the controversy is the practice of taking some of the units an investor holds as fees, rather than the typical custom of charging a percentage (in dollar terms) of the investment return by lowering the net asset value of each unit held.

“It’s like buying a property,” Wang said in an interview at a cafeteria near her office. “If the broker charges a 3% commission for your 100-square-meter home, would you pay by giving them three square meters?”

The method is particularly problematic due to the unusual frequency with which many hedge funds levy fees in China — a single month of outperformance is all a manager needs to claim the units even if the investment is money losing over the longer run.

Reducing units only benefits the managers, according to Lu Yang, chairman of Shanghai BoTong Investment Management, a hedge fund with about 6 billion yuan. The method makes it easier for managers to claim performance fees, and leaves investors feeling cheated because their real returns are much lower than what the net asset value shows, he said on the firm’s WeChat account in July.

Wang said she didn’t realize the issue until Gaoyi Asset Management Co. charged about 10,000 yuan in performance fees even though she lost more than 80,000 yuan on a 2 million yuan investment she’d held for more than a year when she redeemed in April. That spurred her to write the open letter about the practice. Gaoyi manages more than 50 billion yuan.

Reducing the number of units a client holds is typical among Chinese hedge funds that separately calculate individual investors’ high watermarks or peak net asset values (instead of the fund’s total value). Global funds can also differentiate between investors that buy in at different subscription times, although performance fees are booked via a reduction in units’ net asset value.

Many hedge funds in China, however, also use a single fund high watermark to charge performance fees, even if investors who deposited money at different times have different returns from their initial investments. (Both methods are relatively widespread.) That makes it hard to ensure fair treatment for everyone, although this method is easier to understand, Chongyang Assets said in a transcript published on Sina.com.

“The biggest problem with the unit-reduction method is that some clients can’t accurately understand it,” Fang Rui, the general manager at WuSheng Investment, wrote in an article on Sina.com in response to criticism about the practice. It “shouldn’t be demonized.”

The situation Wang faced will be possible as long as performance fees are based on high watermarks, as is common practice in the industry globally, Gaoyi said in a statement to Bloomberg News. It noted that investors’ returns — or losses — are also affected by the timing of their subscriptions and redemptions.

According to Jeff Li, the former chief executive at the Shanghai unit of Citco Group Ltd., a Netherlands-based company that provides administrative and governance services to hedge funds globally, it’s rare for international firms to charge performance fees by reducing the number of investor fund units.

China doesn’t have any specific rules that govern how private funds charge performance fees. However in a 2016 report, the Asset Management Association of China, which registers private funds and products, said the practice of reducing fund units isn’t widely accepted by investors and distributors. AMAC representatives didn’t respond to a request seeking comment.

The issue is aggravated by the frequency with which Chinese hedge-fund managers claim performance fees. Private funds mostly collect performance fees monthly, AMAC said in its 2016 report. It advised against the practice considering the volatility of China’s stock market and lack of claw-back mechanisms.

Globally, such fees are typically collected at the end of the year, or when investors redeem.

Li, who is now the chief product officer at Lufax Holding Ltd., said research findings indicated the more frequently performance fees are charged, the “bigger share of a fund’s profit would go to the investment manager, at the expense of outside investors.”

It was common in the past for Wang’s fund Gaoyi to collect fees monthly if high watermarks were reached, though the frequency has now been reduced to no more than once a year for new products, according to a representative at one of its main distributors who declined to be identified discussing client information.

“The reason I’m speaking up is to invite all stakeholders to examine the status quo, so that the industry can come up with a truly transparent, healthy and mutually beneficial profit-sharing mechanism,” Wang said.