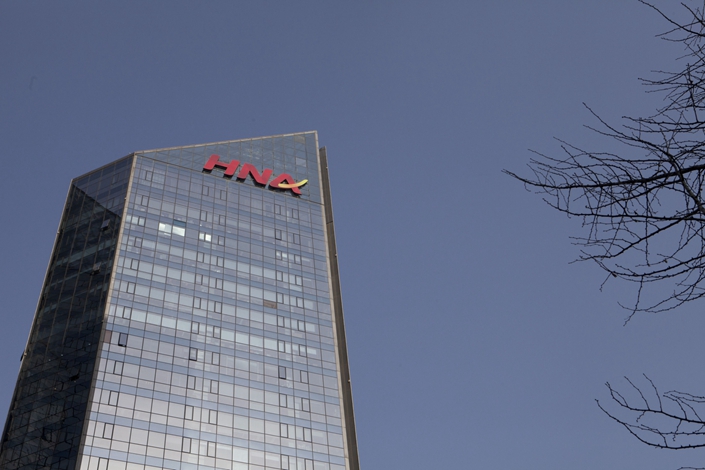 (Bloomberg) — HNA Group Co.’s cash pile shrank 20 times faster than its debts, indicating that pressure is building for one of China’s most indebted conglomerates to speed up asset sales.

Cash, equivalents and short-term investments as of the end of June tumbled 61% from a year earlier, according to data derived from the Hainan-based Chinese group’s interim report released on Friday. By comparison, total debt fell 3%.

The figures illustrate how HNA’s liquidity challenges persist more than a year after the company that was once at the forefront of China’s unprecedented acquisition binge began dumping tens of billions of dollars in assets as borrowing costs soared. Other trophy hunters such as Dalian Wanda Group Co. and Anbang Insurance Group Co. have also had to reverse their empire-building ways after the Chinese government cracked down on such transactions.

HNA, once the biggest shareholder of the likes of Deutsche Bank AG and Hilton Worldwide Holdings Inc., continues to struggle keeping up with its dues. It failed to repay a yuan-denominated bond in July and creditors seized some of its golf courses and other assets after a unit missed a loan payment.

As bad as its financials are, HNA will probably be able to eventually pay back its debts because of government support, though risks remain that company will default on its obligations, according to Warut Promboon, managing partner at credit research firm Bondcritic Ltd.

Meanwhile, the conglomerate keeps pursuing asset sales — RRJ Capital is in advanced talks to lead a $4 billion investment in HNA’s Ingram Micro, people familiar with the matter have said.

Below are some highlights of HNA’s latest financial figures:

Cash, equivalents and short-term investments fell to 50.4 billion yuan ($7 billion) as of the end of June, compared with 128.1 billion yuan a year earlier, according to the interim report. That’s the group’s smallest cash pile based on semiannual figures stretching back to 2015.

Total debt fell to 525.6 billion yuan at the end of June, the lowest level since the end of December 2016. But short-term debt rose 9.7% to 187.1 billion yuan, which is more than HNA’s cash pile and its earnings combined.

Selling property and shares have also made HNA slimmer, with total assets dropping 12% to 980.6 billion yuan as of the end of June, dipping below 1 trillion yuan for the first time in three years.

HNA posted net losses of 1.08 billion yuan during the first half, the group’s second-straight deficit. Operating profit, which strips out some non-cash expenses, fell 11% to 11.8 billion yuan — the lowest since the end of 2016.