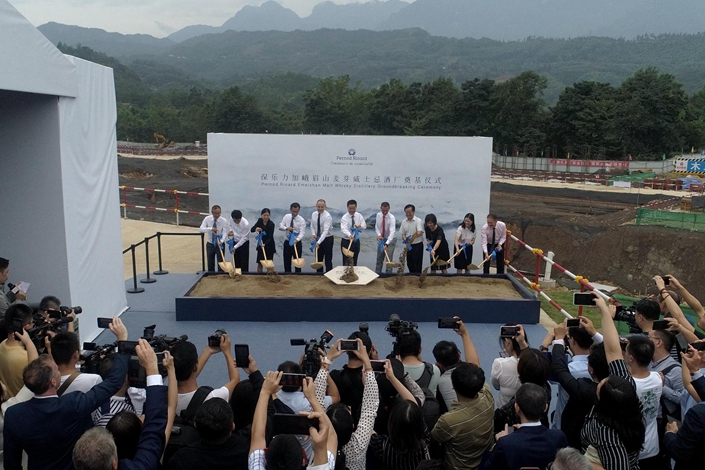 (The Straits Times) — Mount Emei in China's Sichuan province is known as the hallowed home of martial arts legends, but the fabled mountain could soon also be known for something else — whisky.

French spirits-maker Pernod Ricard, the second-largest in the world, has announced plans for a malt whisky distillery at the foot of the mountain — the first such foreign-owned distillery in China.

The company's $150 million investment in the 32 acre distillery comes as Chinese consumers are fast developing a thirst for the smoky brown liquor.

Pernod Ricard Asia chief executive Philippe Guettat said last week that the location was picked for several reasons, including its rich history, a pristine water source and the region's “terroir” — a term that refers to the soil, climate and other environmental conditions of an area.

“We think having a malt whisky from China will give us another edge to attract different types of consumers, and increase the repertoire for malt whisky drinkers in China,” said Guettat in a phone interview.

The Mount Emei distillery will have a Chinese master distiller, and support from whisky experts from Scotland and Ireland, he added. It is to begin production in 2021, but the whisky would have to be aged in oak barrels for at least two years before it can be sold.

Pernod Ricard is one of many foreign companies jostling to get a slice of the Chinese market.

While baijiu — a Chinese grain liquor typically made from sorghum — remains the most consumed spirit in China, consumers are developing a thirst for foreign spirits like whisky as they become more affluent.

The country’s whisky imports have risen steadily over the years, reaching $135.7 million in 2017, according to latest available data from the United Nations Comtrade database. The figure is over 26% higher than the $107.4 million imported in 2014.

“There is an interest to discover new tastes, new trends, from especially the upper-middle class,” said Mr Guettat.

The growth in demand for whisky is being driven largely by consumers born after 1980, Chinese research firm Daxue Consulting said in a June report.

“Chinese consumers are trying to take Western spirits in the same way as Chinese baijiu. Single malt whisky, for example, is becoming a new favorite in bars,” it added.

Whisky fan and marketing professional Cao Yang, 37, said that while rare whisky used to be hard to come by within China, nowadays it can be commonly found on e-commerce platforms like JD.com.

“Many times the price is also lower. It also shows that domestic demand for whisky is growing and overseas sellers are putting more investment into the Chinese market,” said Mr Cao.

Entrepreneur Xiong Xiao, 30, said the drink has become a symbol of affluence and the good life.

“If you meet business contacts, having a whisky is fashionable, it’s a sign that you are refined and classy,” she said.

This article originally appeared in The Straits Times.