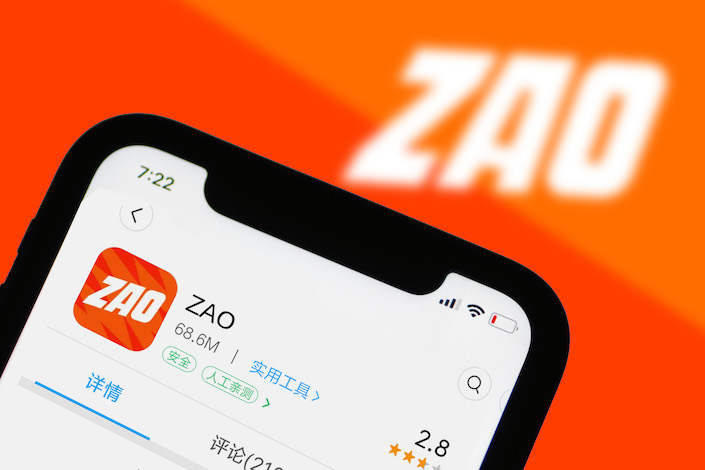 Momo Inc.’s shares slid by their most in a month after China’s technology industry overseer began an inquiry into how its Zao face-swapping app handles user data.

The stock slid 6.6% after the Ministry of Industry and Information Technology responded to an online outcry about privacy terms involving the app, which went viral in the world’s biggest smartphone market. The ministry asked executives at the Chinese company to “rectify” the app, according to a statement posted to its official social media account. It also asked Momo, better known as a developer of hookup and live-streaming services, to only collect and use personal data according to local laws. The company should assess security risks on new platforms and prevent the use of information in online fraud, according to the statement.

Zao’s developers said in a statement Wednesday they would abide by the laws, regulations and requirements of the authorities, and implement higher standards to secure user data.

Momo’s app launched recently and rapidly topped the free downloads chart on China’s Apple iOS store. It lets users upload a headshot of themselves and swap faces with the likes of Leonardo DiCaprio and Marilyn Monroe in popular movie scenes. But delight at the prospect of becoming instant superstars turned sour as privacy implications sank in.

An earlier version of Zao’s user agreement stated the app had “permanent” rights to all user-generated content. The developers have since tweaked the terms and said they were addressing privacy issues. But Zao was deluged by a wave of negative reviews that sent its App Store rating to 1.9 stars out of 5 at one point.

“When the initial freshness of the play fades, we think users are likely to quickly become bored and we are unsure how the company plans to retain its users,” CICC analyst Natalie Wu wrote in a note Tuesday.