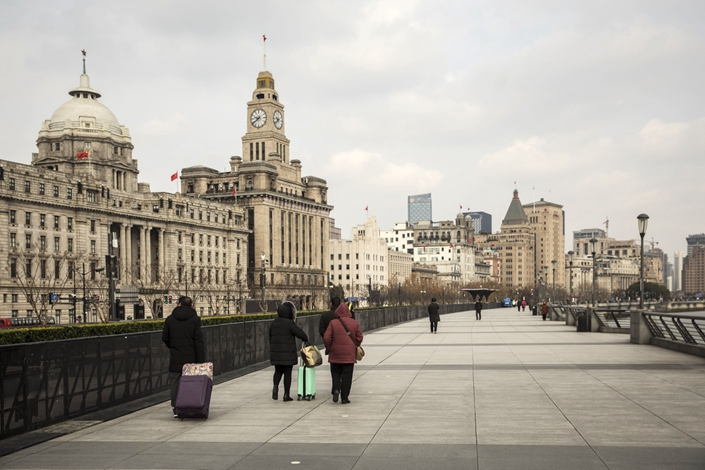 Pedestrians walk on the bund in Shanghai, China on Friday, 28 December 2018. Photo: Bloomberg

The nation’s issuers have missed repayments on a record 31.8 billion yuan ($4.4 billion) of private bonds this year through August, compared with 26.7 billion yuan for all of 2017 and 2018 combined, according to data by China Chengxin International Credit Rating Co., one of China’s biggest rating firms.

“Private bond issuers are not obliged to make public disclosures, therefore companies may choose to repay public notes first when they are under financial stress,” said Chen Su, a bond portfolio manager at Qingdao Rural Commercial Bank Co. Borrowers may seek to extend their private debt through secret negotiations, he said.

The outstanding amount of publicly issued bonds is about three times that of private notes, according Bloomberg-compiled data. Still, the private placement market is a key source of funding for China’s smaller non-state-owned companies and local government financing vehicles as deals are struck with a small group of qualified institutional investors, shielding firms from market volatility.

Total corporate bond defaults in China year-to-date were at 78.4 billion yuan, up 51 % from the same period last year due to a slowing economy.

HNA Group International, a unit of struggling private conglomerate HNA Group, honored a $300 million note due Aug. 18, after missing repayment on a 1.5 billion yuan private bond at the end of July. An HNA Group representative declined to comment on whether the private debt had been repaid when contacted by Bloomberg.

There are signs the defaults are weighing on demand for such notes. Issuance of privately-placed corporate notes in China declined in the four months through July, in the longest falling streak in over two years, before rising to around 160 billion yuan in August, according to bond issuance data compiled by Bloomberg.

Investors are also asking for higher risk premium on privately issued notes. The average coupon difference between new sales of private and public bonds was 154.2 basis points in January, the spread rose to 179.5 basis points at end-August, according to data compiled by Bloomberg.

“Investors will probably ask for even higher premium on private bonds of risky companies,” Chen said.

The ratio of delinquency to total private notes outstanding was 0.63%, more than double a proportion of 0.26% in the public bond market, according to China Chengxin International Credit Rating data.

For Yang Hao, a fixed-income analyst at Nanjing Securities Co., concern over rising defaults in the private sector means investors will continue to favor the state sector.