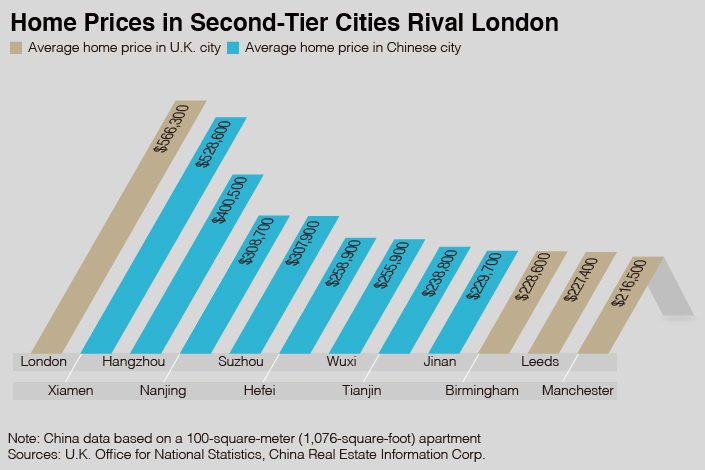 Some of the world’s priciest housing markets aren’t where you might think. A four-year property boom in China has elevated a collection of little-known cities and turned them into real estate gold.

While that’s been great news for speculators, it’s raising concern about whether China’s educated middle-class is quickly being priced out of these so-called second-tier cities, undermining Beijing’s goal of making them home to the millions moving from rural areas. Another risk is increasingly stretched family budgets: The average household debt-to-income ratio in China soared to a record 92% last year from just 30% a decade ago.

“A property bubble is foaming up in many places in China,” said Chen Gong, the chief researcher at independent strategic think tank Anbound Consulting. “Prices are starting to look abnormal when compared to residents’ income.”

Vincent Fan is a case in point. The 26-year-old IT engineer says the lack of affordable housing is forcing him to consider moving from Xiamen, the city he’s called home for eight years after relocating from inland Shaanxi province to study. Home prices - which in Xiamen have more than tripled over the past decade - are now roughly 40 times his salary, he says.

“I’m getting paid like I’m in a small city but when I’m looking to buy a home, the price is the same as in a metropolis,” he said. “It’s just impossible.”

A 1,000-square-foot apartment in downtown Xiamen, a port city on China’s southeast coast, is almost as expensive as the average home in London, even though local wages are a quarter of what’s on offer in the U.K. capital. In Hangzhou, home to the headquarters of tech giant Alibaba Group Holding Ltd., prices per square foot now rival Seattle, where Amazon.com Inc. is based.

How these cities found themselves here is a confluence of urbanization and the promise of quick capital gains.

Some 90 million people have relocated from rural areas since 2012, encouraged by better job prospects and policies aimed at giving migrant workers social welfare that’s more akin to urban dwellers. Some local governments, for example, have eased access to schools and hospitals, privileges traditionally enjoyed by residents born in those cities.

Owning property (or multiple properties), meanwhile, is something of a national obsession in China after frenetic price gains in the early years of this decade made hundreds of thousands of people rich, at least on paper. That mentality has meant literally millions of apartments across the country sit empty as their owners wait for prices to appreciate.

According to China Real Estate Information Corp., the average house price-to-income ratio, a gauge of how many years of earnings it takes to buy a home, rose to a record in 2018, despite Beijing’s efforts to keep a lid on prices. While it costs a Londoner around 13 times their annual salary to purchase property in the U.K. capital, residents in 14 Chinese cities including Sanya on the tourist island of Hainan and Fuzhou on the east coast, face a higher ratio.

That means increasingly large slices of a family’s income are being diverted to monthly mortgage repayments, or to meet home downpayments. In a country where low leverage was once seen as a buffer to any financial shock, household debt is now “approaching its limit,” the Institute of International Finance said in a report last month.

Those buying homes outside of China’s big cities like Beijing, Shenzhen and Shanghai are also typically the most stretched, a China Index Holdings Ltd. study last year showed. In mega metropolises, people tend to be more affluent and so don’t need as big a mortgage.

“This housing surge can’t be justified by economic growth or people’s paychecks,” said Shen Xin, a property analyst at China Real Estate Information. “Many have bought homes earlier than they planned, just to catch the price rally.”

The price growth -- dwelling values across second-tier cities have risen an average 68% since mid-2015 -- has also been fueled by an easing of rules on local residency permits, or hukou. Having a hukou is often a prerequisite for buying a home in a city and authorities have used them variously to cool as well as stimulate the market.

In Suzhou, a city with a population of around 11 million, the property craze is in full swing. In April, almost 2,000 home buyers lined up late into the evening for a chance to snap up one of the 538 apartments on offer at a condominium a 30-minute drive from Suzhou Industrial Park, a manufacturing zone that’s attracted a swathe of international companies.

“I’ve been on the hunt since the market abruptly heated up six months ago,” said Joyce Zhu, a 28-year-old designer who already owns a home in Suzhou but bought a two-bedroom unit as an investment. All the projects are oversubscribed and “they’re becoming more expensive every time,” she said.