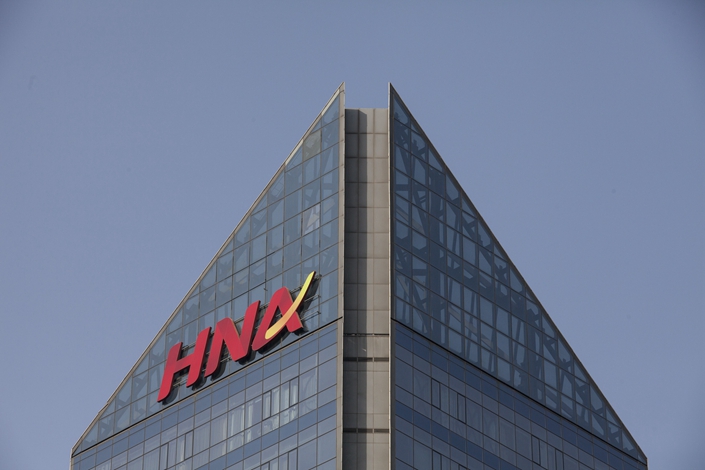 Signage for HNA Group Co. is displayed atop the company's building in Beijing, on Feb. 1, 2018. Photo: Bloomberg

(Bloomberg) — HNA Group Co. is considering reviving a sale of its container-leasing business Seaco as the troubled Chinese conglomerate seeks more cash to pay down debt, people with knowledge of the matter said.

The company has decided to restart work with advisers to identify potential buyers for Seaco, said the people, asking not to be identified because the matter is private. That came after HNA earlier this year decided to shelve a sale of the business due to disagreements over valuation.

While the conglomerate aims to fetch more than $1 billion from a sale, its liquidity challenges mean it may consider lower offers, the people said.

HNA is redoubling efforts to reduce its pile of debt. RRJ Capital, run by former Goldman Sachs Group Inc. partner Richard Ong, is in advanced talks to lead a $4 billion investment in HNA-owned technology firm Ingram Micro Inc., Bloomberg News reported in August. The private equity firm completed the purchase of Gategroup Holding AG from HNA in a deal that valued the airline catering company at about $2.8 billion.

HNA’s cash, equivalents and short-term investments as of the end of June tumbled 61% from a year earlier, according to data derived from from the Hainan-based Chinese group’s interim report released last week. Its total debt fell 3%.

Deliberations about a sale are ongoing, and no final decision has been made, the people said. A representative for HNA declined to comment.

Seaco offers dry freight, refrigerated containers and tanks, according to its website. HNA and private equity firm Bravia Capital completed the $1.05 billion purchase of the company, formerly known as GE Seaco, in 2011 from owners including General Electric Co.