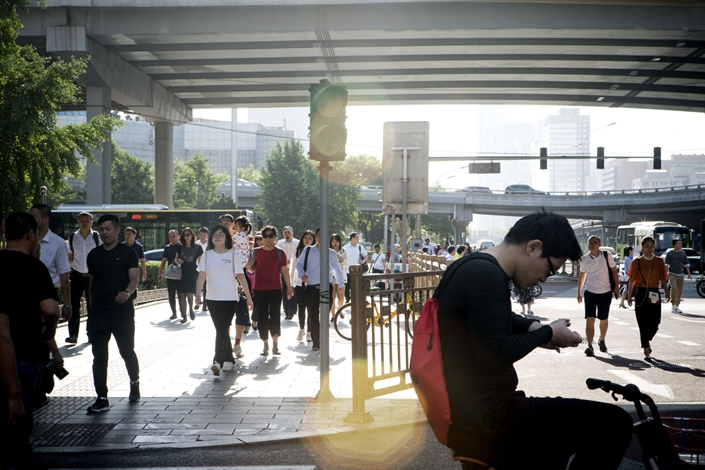 Since its inception in 2013, Yu’e Bao has lured more than 600 million Chinese investors. Photo: Bloomberg

(Bloomberg) — The world’s biggest money-market fund, which once offered annualized returns of nearly 7%, is on track to lose its crown after shrinking by more than $120 billion in just over a year.

Known as Yu’e Bao, the Chinese fund operated by an affiliate of Alibaba Group Holding Ltd. had 1.03 trillion yuan in assets under management at the end of June, or an equivalent of $144 billion based on current exchange rates, down from a peak of $270 billion on March 31, 2018. It’s on course to fall behind the JPMorgan U.S. Government Money Market Fund, which has been hovering around $150 billion level since 2017, and Fidelity Government Cash Reserves fund, according to figures compiled by Bloomberg.

The fund once benefited from China’s relatively high interbank rates, but investors started heading for the exits as curbs placed since 2017 took effect, and outflows accelerated when returns dropped and rival products sprang up offering more attractive yields.

Since its inception in 2013, Yu’e Bao has lured more than 600 million Chinese investors. The fund is owned by Alibaba affiliate Ant Financial and is available through the tech giant’s Alipay platform with no minimum investment requirement.

As the fund grew in size, it was labeled a “blood-sucking vampire” by a prominent commentator on state-run television, and executives at China’s largest banks called for regulators to curb its rapid expansion.

In response to regulatory pressure, the fund in 2017 cut the maximum amount individuals could invest and took other steps to limit inflows.

Ant Financial said in a statement that the Yu’e Bao fund is just one of the 24 money-market funds on Alipay’s Yu’e Bao spare cash management platform. Its asset fluctuation doesn’t reflect the overall performance of the Yu’e Bao platform, the firm said.

Yu’e Bao’s returns have fallen to an annualized rate of 2.29%, according to latest figures, compared with 6.7% in 2014. Yields from Chinese banks’ wealth management products were more than 4% in July, figures from research firm PY Standard show.