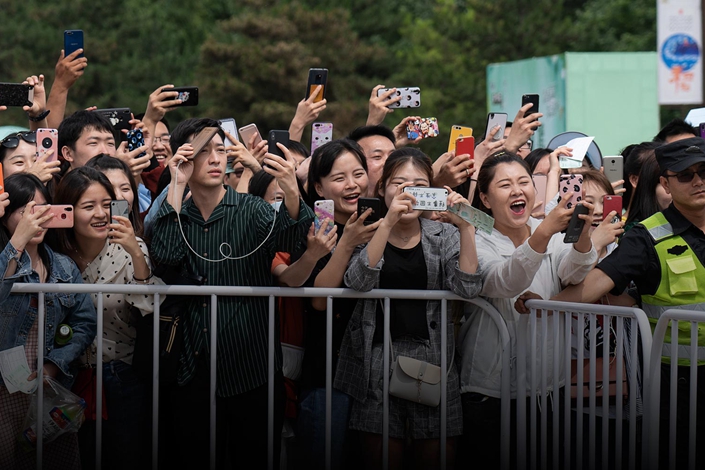 Fans take photos during a promotional event in Xi’an, Shaanxi province, on May 19. Photo: VCG

Earlier this month, China’s fangirls took a break from worshipping their favorite “little fresh meat” stars to stan a different kind of idol: “Ah Zhong gege,” or “Brother China.” Declaring allegiance to their country, they organized themselves into teams and flooded popular Western social networking sites like Instagram and Facebook with positive messages, downvoting negative comments.

This social media army didn’t spring out of nowhere. Participants and organizers drew on years of experience in the trenches of China’s cutthroat world of idol fandom, where social media traffic and rankings — measured in comments, reposts, and likes — are everything.

In mid-July, millennial fans of Taiwan’s 40-year-old superstar singer Jay Chou made headlines for a concerted campaign that toppled 21-year-old idol Cai Xukun from the top of microblogging platform Weibo’s “super topics” rankings. It was a victory for Chou, but Cai’s Generation Z fans — who had kept their idol at the top of the social media charts for 64 straight weeks — quickly regained control. At time of publication, Cai was back to number one on the super topics list with 7.6 million posts, almost 5 million fans, and close to 1.3 billion page views.

China’s contemporary rankings-focused fandom culture can be traced back to the 2005 televised singing contest “Super Girl,” which allowed viewers to vote for their favorite contestants. It has skyrocketed in the ensuing years, thanks to better technology and the influence of Korean and Japanese fan culture.

Today, fandom is defined by so-called “fan circles,” or “fanquan.” Primarily — though by no means exclusively — composed of young women, membership in a fan circle isn’t simply about liking a star: For many, it’s a vocation.

The most passionate fan circle members volunteer their time, energy, and expertise to make their idols as popular and influential as possible. Some spend thousands of yuan on albums, movie and concert tickets, and crowdfunding campaigns for Times Square billboards. And, as both the recent Instagram raid and the Jay Chou-Cai Xukun fan battle indicate, the most powerful fan circles are organized, disciplined, and rigidly hierarchical teams capable of swinging public discourse and driving social media traffic.

The latter is crucial. Behind the seemingly crazed behavior of fan circles lies rational business logic. China’s celebrity marketplace is highly data-focused. The higher a star’s social media rankings, the better endorsement deals they’ll get, and the more casting agents will pay attention to them. To boost their clients’ profiles, talent management companies sometimes buy traffic. Just this March, Beijing police shut down an app that had earned millions of yuan for inflating celebrity social media stats. Talent companies, however, also work to cultivate impassioned fan bases, including by inserting paid employees into fan circles to help boost enthusiasm and activity.

Yet, a successful fan circle is ultimately still reliant on the unpaid work of the fans. They’re the ones who take it upon themselves to boost their idol’s image by sharing and liking positive posts, buying the products he or she endorses, and creating sharable content. And they’re the ones who organize the kind of social media presence needed to keep stars topping the rankings.

Often, fan circles divide their work among an array of specialized fan platoons. At the center are so-called data teams, which forward updates about the circle’s chosen idol and are responsible for improving online poll performance, increasing traffic rankings, and mobilizing other fans to share positive social media posts about their star and bury the negative ones.

Meanwhile, squads of copywriters produce model comments that fans can use when posting on the idol’s social media pages. Art designers do the same for images of their star, while market outreach teams disseminate content to entertainment blogs and other outlets.

In the event of a scandal, fan circles will even act as volunteer crisis managers. The data team will mobilize one set of fans to drown out the story with positive content about their idol, another to obscure negative comments and stories.

Managing all this is no easy task, and hierarchies quickly form inside most fan circles. At the top are the professional fans — talent management companies’ paid representatives — while the bottom is composed of casual fans: passive consumers who make up most of the members but only occasionally take part in fan circle activity. But it’s the middle that’s the most crucial — the core, unpaid fans who do most of the work to build up their idol’s image and maintain or improve their social media traffic rankings.

Most core fans have at least a college education, and quite a few come from top universities. This makes sense, as their commitments to their idol require a certain level of capital — both social and financial. They take the lead in producing positive images and text, and keep order within the fan circle.

In place of money, some are motivated by the chance to be part of something bigger than themselves. For many — especially members of the creative team — fan circle membership is a way to be seen. “When I see my creations getting reposted and commented on, I feel a sense of recognition and pride,” one fan circle member told my research team. “It takes a lot of work to make an image, but the response from everyone is the best motivation.”

It also helps fans feel closer to their idol. “Once, my idol posted on Weibo saying (my work) ‘looks good,’” said the above-mentioned artist. Said another: “When I see my work combined with the symbols relating to him (my idol), I feel closer to him.”

In the process, these core fans transform themselves from passive consumers of fandom culture to what Alvin Toffler called “prosumers” — individuals who simultaneously produce and consume a product. And talent management companies have started to respond to this shift by rethinking how they manufacture, package, and promote their idols.

In today’s China, it’s the fans who make the idol, as much as the idol draws in the fans. And while fan circles may seem crazy, if the events of the past two months prove anything, it’s that the ways they’re redefining fandom could carry implications well beyond just celebrity culture.

Ju Chunyan is an associate professor of sociology at Beijing University of Technology.