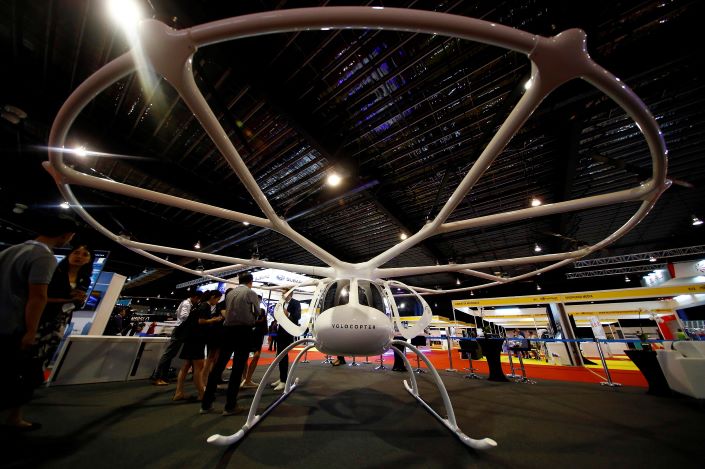 Geely, which owns Volvo Cars and a stake in Daimler AG, led a round of investment that raised 50 million euros ($55 million) to help the VoloCity air taxi launch commercially within the next three years, the companies said Monday. Geely and Bruchsal, Germany-based Volocopter agreed to form a joint venture planning to bring airborne cars to China.

Volocopter also is in talks to raise more funds by the end of the year, it said. Daimler has owned a stake since 2017.

Li is extending his empire beyond cars by delving into areas from low-orbit satellites to microchips. His group announced in 2017 it would buy U.S.-based Terrafugia Inc., which is trying to bring a flying car to market in 2019. Geely also signed an agreement in November with state-owned China Aerospace Science and Industry Corp. to build “supersonic trains” using homegrown technology.

“Geely is transitioning from being an automotive manufacturer to a mobility technology group,” Li said.

Variations on the flying car also are being developed in the U.S. and Japan. Uber Technologies Inc., Boeing Co., Airbus SE and a Toyota Motor Corp.-backed startup are among the companies trying to bring airborne vehicles to market.

Japan’s government wants the country to become a leader in the technology, producing a national road map for its development and studying ways to define and advance regulations. Last month, a flying car made by NEC Corp. hovered off the ground for about a minute.