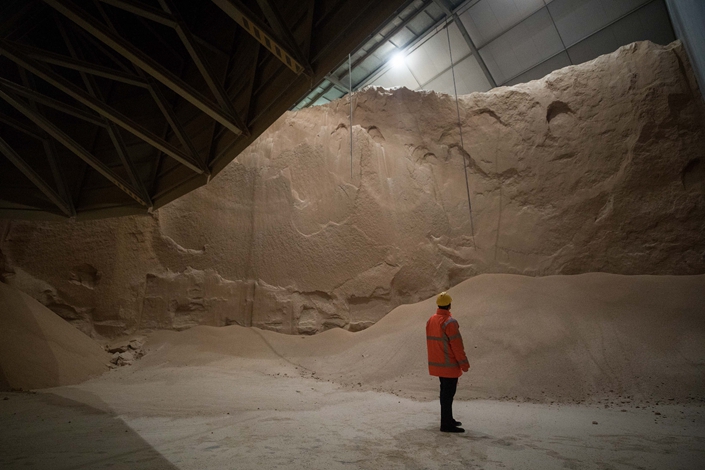 An employee looks at soybean meal produced by Glencore PLC as it is stored before transportation at the Port of Rotterdam, Netherlands, on April 25, 2017. Photo: Bloomberg

(Bloomberg) — China is opening the door to soybean meal shipments from Argentina, the world’s biggest exporter of the animal feed, as Beijing looks to pivot away from U.S. agricultural products amid a trade war with Washington.

Beijing has been loath to accept Argentine meal because it prefers to import raw soybeans and process them in China to promote its own crushing industry. But the trade war has been turning global supply chains on their head.

Firstly, as China shunned U.S. beans, it turned to Brazil — and to a lesser extent Argentina — for supplies. Now it’s going one step further, accepting value-added meal from Argentina even though the move could risk angering its crushers.

It remains to be seen whether China will actually import Argentine meal. The countries still need to jump through bureaucratic hoops before cargoes can set sail, according to Gustavo Idigoras, head of crop export and crushing chamber Ciara-Cec. They include China giving final approval to Argentina’s crushing plants, which should happen next month, and inclusion of meal on China’s customs register, which could take five months, Idigoras said.

Being able to export to China would be a boost for Argentina’s crushers. Profit margins have been falling and idle capacity has increased to more than 50%.

The announcement comes at a time when China is expanding its footprint in Latin America by developing infrastructure projects across Argentina, from hydroelectric plants to railways.