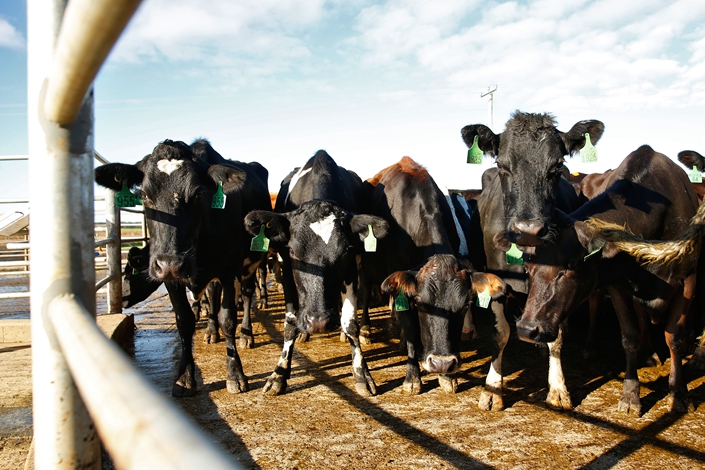 Cows waiting to be milked at a dairy farm in Woolnorth, Tasmania, on May 30, 2016. Photo: Bloomberg

(Bloomberg) — China Mengniu Dairy Co. agreed to buy organic infant formula maker Bellamy’s Australia Ltd. for A$1.5 billion ($1 billion), securing a premium brand in one of the fastest-growing segments of the dairy market.

The Hong Kong-based firm offered A$13.25 per share Monday for Bellamy’s, a sizable 59% premium to the stock’s last closing price. The Launceston, Tasmania-based company’s board unanimously recommended the offer.

The deal, which is subject to approval from Australia’s Foreign Investment Review Board, would hand China’s second-largest dairy producer a trusted formula brand as it seeks to wrest back market share from global rivals.

Bellamy’s has been producing formula in Australia since 2004 and is a stalwart of supermarket shelves there, part of the appeal for Mengniu with Chinese consumers still wary of local manufacturers after a tainted baby milk scandal more than a decade ago.

The deal will help Mengniu extend its portfolio into premium products after it acquired control of lower-end maker Yashili International Holdings Ltd. in 2013, according to UOB Kay Hian Ltd analyst Robin Yuen.

“It gives them a complete product portfolio across lower and higher-end products,” said Yuen. “Bellamy’s is a very strong and internationally recognized brand.”

The premium offered and a lack of specifics on how Mengniu will integrate Bellamy’s likely fueled the Chinese company’s stock drop, said Lei Yang, an analyst at China Galaxy International Financial Holdings in Hong Kong. But “strategically, it’s a good move” that will help Mengniu narrow its sales gap with Yili, he said.

Mengniu’s Chief Executive Officer Lu Minfang said Bellamy’s Australian operations and supply chain were critical to his company. “Our sales growth ambitions for Bellamy’s in Australia, and the broader Asia-Pacific region, will see investment in the local dairy industry,” he said in a statement Monday.

China has been seeking to boost its local baby formula industry and restore confidence after the milk scandal in 2008 killed six children and poisoned 300,000 others. It will support domestic dairy producers in acquiring or setting up overseas bases, encourage foreign dairy firms to invest in China, while tightening regulations on milk-powder imports and online sales platforms.

The deal, which includes A$12.65 per share in cash and a 60 Australian cents special dividend paid by Bellamy’s prior to implementation, is subject to a shareholder vote in December and aims to close by year’s end.

Despite the large premium, the offer represents a potential bargain for Mengniu. Shares in Bellamy’s have fallen from a March 2018 closing-level peak of A$22.52, amid increased competition and delays in gaining a license from China’s State Administration for Market Regulation (SAMR) to sell organic formula in the nation.

The delay hurt the company’s full-year profit, which declined 36% to A$30.1 million, and Bellamy’s pushed its medium-term target of A$500 million annual revenue beyond fiscal 2021. Bellamy’s is the most-shorted stock on Australia’s benchmark index, with a little over 30% of the free float held by bears, according to data compiled by the Australian Securities and Investments Commission.

On Monday, Bellamy’s chief executive Andrew Cohen denied that Mengniu’s ownership could increase the likelihood the SAMR would grant the company license approval, or “fast-forward the process or guarantee any licenses. I am not sure that’s rationale for the deal.”

Cohen was also notably keen to reinforce that Mengniu is promising to maintain Bellamy’s as an Australian business, with local operations and management. This will likely be an important part of Bellamy’s pitch to assuage any concerns about the deal from Australian regulators.

“Mengniu is a preeminent dairy company in China and an ideal partner for our business,” Bellamy’s Chief Executive Officer Andrew Cohen said in the statement. “It offers a strong platform for distribution and success in China, and a foundation for growth in the organic dairy and food industry in Australia.”

Bellamy’s still makes about 70% of its revenue from the Australian market, according to company data compiled by Bloomberg. While foreign infant formula is sold in China, consumers have sought out niche brands like Bellamy’s and a2 Milk Co. on e-commerce platforms to ensure authenticity, with so-called daigous —Chinese shoppers that buy the products in their home markets — selling them at a premium on portals like Taobao and JD.com.