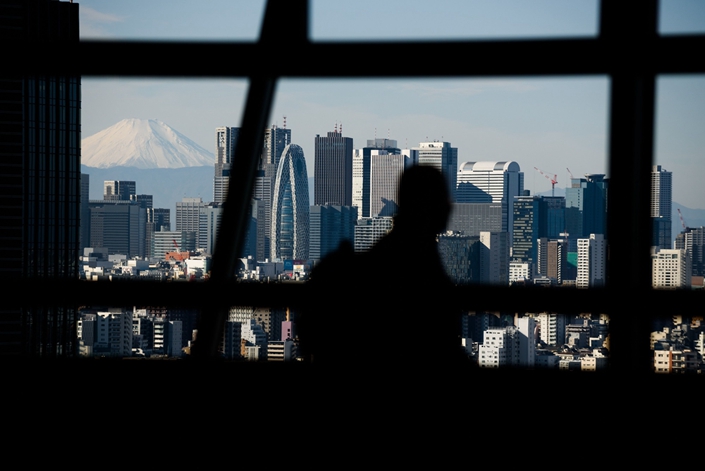 Mount Fuji stands behind buildings as a visitor looks out at the skyline from an observation deck in Tokyo on Jan. 11. Photo: Bloomberg

(Bloomberg) — Japan remained the biggest foreign owner of U.S. Treasurys in July with its holdings rising to a more than two-year high, while China’s stake fell slightly.

Japan’s holdings of U.S. notes, bills and bonds increased by about $7.9 billion to $1.13 trillion, the Treasury Department said in a monthly data release Tuesday. That’s the largest amount held by Japan since October 2016, according to data compiled by Bloomberg.

Japan overtook China as the largest non-U.S. holder of Treasuries in June — the first time it’s held that position since May 2017.

China was the second-largest foreign creditor in July, with $1.11 trillion in holdings, down by a moderate $2.2 billion from the previous month, the data showed.

Overall foreign holdings of Treasuries declined to $6.63 trillion compared with $6.64 trillion in June. Belgium, Saudi Arabia and Taiwan boosted their holdings in July from a month earlier.

Japan’s holdings of U.S. securities have been rising over the past year as the world’s pool of negative-yielding debt grows, with the total climbing to above $14 trillion at the end of July. That’s made Treasuries more attractive to some overseas investors, given that U.S. debt offers some of the highest yields in developed markets.

While rates on benchmark 10-year Treasuries have plunged to multi-year lows in recent months, the rate on 10-year Japanese government bonds is currently minus 0.15%.

Both China and Japan — the world’s second- and third-largest economies behind the U.S. have been negotiating trade deals with the Trump administration, though their efforts are showing differing results. While President Donald Trump announced on Monday that he’d struck an initial agreement with Japan over tariffs and digital trade, his administration and China have failed to deliver a deal during their more than year-long trade dispute.

The U.S. and Japan are expected to enter the limited agreement in the “coming weeks,” Trump said.

Meanwhile, lower-level U.S. and China negotiators are scheduled to convene this week to continue talks, and pave the way for an expected meeting of senior officials including U.S. Trade Representative Robert Lighthizer, Treasury Secretary Steven Mnuchin and Chinese Vice Premier Liu He in Washington, possibly around early October.