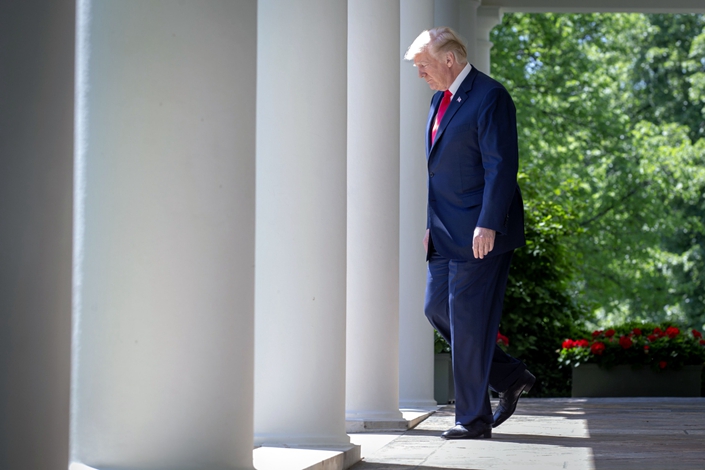 United States President Donald J. Trump walks along the colonnade outside the Oval Office prior to a National Day of Prayer event in the Rose Garden at the White House in Washington, DC on May 3, 2018. Photo: Bloomberg

(Bloomberg) — Donald Trump’s selection of top hostage-affairs official Robert O’Brien as his new national security adviser sends a clear signal the president is seeking to turn the page from the confrontation and controversy that defined John Bolton’s tenure in the job.

Bolton regularly picked ideological fights with cabinet secretaries and the president over the approach to hotspots such as Afghanistan and Iraq. O’Brien, meanwhile, is a former corporate litigator and lawyer with the military’s Judge Advocate General’s Corps who is seen as an ally of Secretary of State Michael Pompeo. People who know both men say O’Brien will help mediate disputes, not create them.

“I don’t think he’s looking to slam his fist on the table and yell at a four-star general,” said Christian Whiton, a former State Department official who has known O’Brien since well before his time on Senator Mitt Romney’s presidential campaign. “He sees himself more as that private counselor to Trump and working as an arbiter and not as a commander.”

While many White House staffers viewed Bolton as a Washington insider who strategically leaked his dissatisfaction with the president’s foreign policy to the media, O’Brien has deployed the public show of loyalty adopted by the president’s most favored aides, lavishing praise on Trump as uniquely successful at winning the release of Americans in captivity abroad.

And while Trump often joked about his confrontations with Bolton, who he said was always trying to get him into a war, officials say O’Brien has developed a trust factor with the president who sees his new national security adviser — with his finely tailored suits and well-coiffed gray mane — as someone out of central casting.

That relationship will prove crucial as O’Brien assumes his role helming the National Security Council at a pivotal moment, with the administration weighing how to respond to the recent attack on Saudi Arabia’s oil industry, as well as foreign policy crises in Venezuela and North Korea.

Working in O’Brien’s favor is that he has a record of having delivered for the president earlier in his tenure. Trump tapped the longtime Republican lawyer to work for the release of American hostages held overseas and ordered him to Sweden to monitor proceedings involving A$AP Rocky, an American rapper who was arrested after a Stockholm street fight.

O’Brien also was involved in the case of Danny Burch, who was working as an engineer at an oil company when he was taken hostage by a criminal gang in Yemen. O’Brien was in the Oval Office when Trump welcomed Burch back home following his release, and used the appearance to shower praise on the president.

“This wouldn’t happen with all of these hostages and detainees without the support of the president,” O’Brien said. “The president has had unparalleled success in bringing Americans home without paying concessions, without prisoner exchanges, but through force of will and the goodwill that he’s generated around the world.”

That acclaim seems to have stuck with Trump, who told reporters on Tuesday: “Robert O’Brien said Trump is the greatest hostage negotiator in history. He happens to be right.” On Wednesday, standing alongside O’Brien on the tarmac in Los Angeles, Trump added: “I think we have a very good chemistry together and I think we’re going to have a great relationship.”

O’Brien benefited from the support of Pompeo, who was given significant sway over the pick after the secretary of state repeatedly clashed with Bolton. Bolton’s departure last week left Pompeo unchallenged as Trump’s closest foreign policy adviser.

Before being named hostage envoy, O’Brien had been a partner at a California law firm and advised the 2016 presidential campaigns of Texas Senator Ted Cruz and former Wisconsin Governor Scott Walker. He was Romney’s senior foreign policy adviser when the Utah Republican ran for president in 2012, a position he earned in part through his friendship with Romney’s son, Tagg.

O’Brien was involved in foreign-policy discussions among Republican strategists after Senator John McCain and Romney lost in 2008 and 2012, pressing for a return to former President Ronald Reagan’s “peace through strength” philosophy. In his 2016 book “While America Slept,” O’Brien railed against what he called Barack Obama’s “lead from behind” approach and accused the former president of emboldening “autocrats, tyrants and terrorists.”

In the book, O’Brien calls Obama’s nuclear deal with Iran a “disaster” and compares it to the 1938 Munich Accords agreed between U.K. Prime Minister Neville Chamberlain and Adolf Hitler. Trump quit the nuclear accord in 2018.

O’Brien didn’t answer a phone call on Wednesday or respond to an email seeking comment.

O’Brien also represented Oklahoma and its then-Attorney General Scott Pruitt — later tapped by Trump to run the Environmental Protection Agency — in the state’s lawsuit against Volkswagen AG over the company’s deceptive emissions reporting.

But while O’Brien has deep connections to the Republican establishment, he has no known experience managing an organization the size of the National Security Council (NSC), which has hundreds of employees, many detailed from other federal departments and agencies. Staffers will be waiting to see if he uses their expertise more regularly than Bolton, who largely did away with traditional NSC deliberations.

“He has done a brilliant job bringing home 14 hostages,” said Chris Burnham, chairman of Cambridge Global Capital LLC, who was a member of Trump’s transition team at the State Department. O’Brien “is balanced, levelheaded and will bring a fresh non-Washington insider approach to the office,” Burnham added.