iPhone 11 Released in China to Mixed Reception From Shoppers 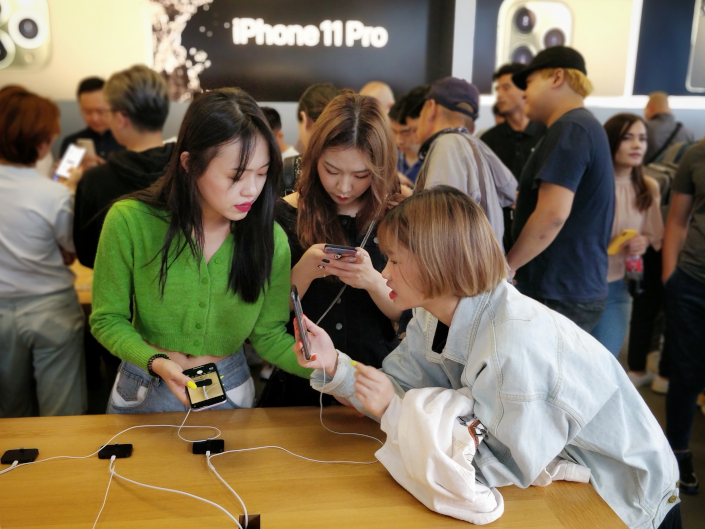 As the brand-new iPhone 11 hit the shelves in China on Friday, scalpers greeted the hundreds of shoppers who had flocked to Apple’s flagship store in Taikoo Li Sanlitun, Beijing’s upscale retail district.

“Stock available,” they called out to woebegone customers who had arrived to find the much-anticipated devices sold out in-store. They remain available online.

The basic iPhone 11 line was also available, but “nobody wants those,” one scalper said.

An Apple spokesperson declined to say how many iPhone 11s were made available for purchase in stores each day.

The American smartphone-maker is hoping for a return to form in China after last year’s models, the iPhone XS and iPhone XR, drew tepid responses from the country’s shoppers.

Preorder sales have been encouraging, with e-commerce giant JD.com announcing that more than 1 million iPhone 11 handsets were reserved within a day of becoming available Sept. 13.

But several shoppers in Taikoo Li were less than complimentary about the new handset. “It’s ugly,” said one shopper, who only gave his last name, Wang. “It doesn’t compare at all to the Samsung Note.”

Other customers targeted the device’s overall craftsmanship. “I don’t actually mind the camera,” said Liu Xingdong. “[But] the shininess of the frame is a little unrefined.”

Official prices for the iPhone 11 in China range from 5,499 yuan for a standard model to 12,699 yuan for the all-singing, all-dancing iPhone 11 Pro Max — significantly cheaper than last year’s XR.

Notably, the handsets lack 5G capability even as Chinese phone-makers race to release devices that can make use of next-generation networks.

But Liu was unconcerned about that, saying such networks will not be widely used for another couple of years. Neither did he expect ongoing trade tensions between China and the U.S. to derail his fellow citizens’ interest in the American tech giant.

“Once people know it’s cheap, lots of them will buy it,” he said.