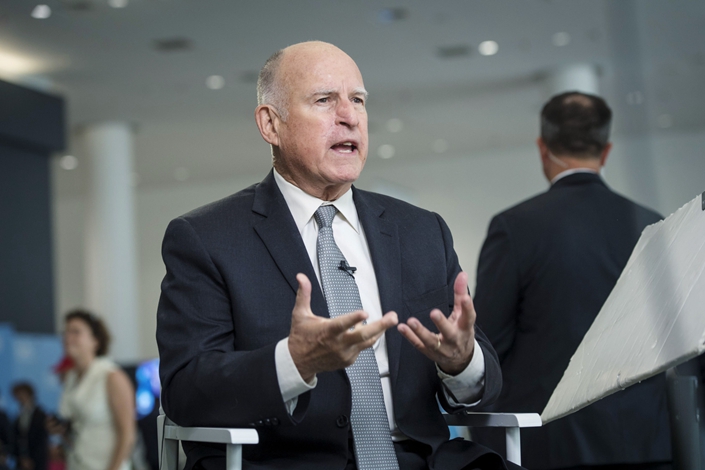 (Bloomberg) — Two of President Donald Trump’s biggest foils are teaming up on an issue he loves to scoff at: climate change.

Former California Governor Jerry Brown and China’s chief climate official, Xie Zhenhua, are launching a think tank to push policymakers on both sides of the Pacific to jointly develop better ways to cut greenhouse gases. A key part of the effort, based at the University of California, Berkeley, is trying to block Trump’s plan to roll back vehicle emissions standards.

“Trump is offering resistance to absolutely imperative climate actions,” Brown said in a telephone interview. “This is an important collaboration, and it’s extra important because of the growing animosity at almost every level in the America-China relationship.”

During his final years in office, Brown was among the most vocal U.S. leaders pushing back on Trump’s efforts to gut environmental laws and expand use of fossil fuels. His partnership with Xie comes days after the White House announced it’s moving to revoke California’s authority to regulate greenhouse gas emissions from autos, taking aim at a legal provision that grew out of the anti-smog efforts of the 1970s.

Trump — a Republican who once said climate change “was created by and for the Chinese” to undermine U.S. competitiveness — has made it a priority to repeal environmental regulations and make it easier to extract and burn fossil fuels that cause global warming. The president is also locked in a bitter trade war with China that’s led to tariffs on thousands of goods and roiled global markets.

Brown, a Democrat, said one of his goals for the initiative, called the California-China Climate Institute, is to push China to toughen its own vehicle emissions standards. The move, he said, would make it “very likely” that automakers continue to make low-emission vehicles even if Trump succeeds in rolling back American standards.

“They don’t want to be frozen out of the China market,” Brown said.

The initiative at Berkeley will work with government agencies in California and China, as well as the Institute of Climate Change and Sustainable Development at Tsinghua University in Beijing.

“We believe that by working together, we can make our due contribution to global climate governance,” Tsinghua University President Qiu Yong said in a statement.