Chinese Economy Weakens Across the Board, Early Indicators Show 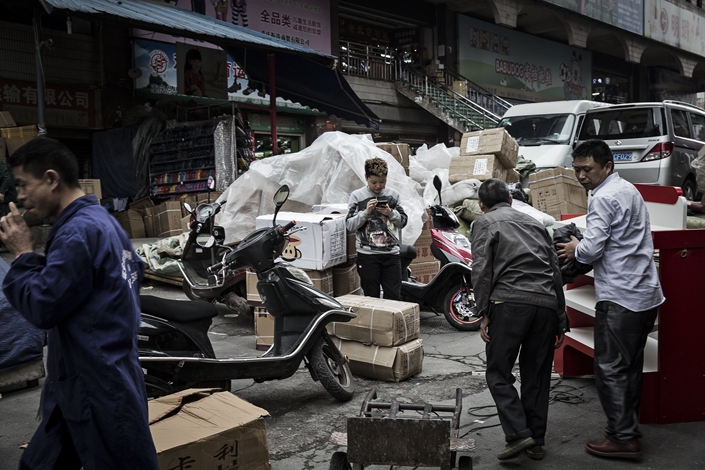 A woman uses a smartphone as workers move boxes at a street market in Chongqing on April 12, 2016. Photo: Bloomberg

(Bloomberg) — China’s economy continued on a slower trajectory in September, with weakness in manufacturing and retailing combining with the trade war to undercut growth.

Although trade tensions have eased somewhat since last month, there’s been no turn-around in global demand in September, meaning the lean times for exporters and manufacturers continue. Growth in retail sales and investment is slowing too, leaving no clear domestic driver to pick up the slack.

The first official data for September will be released on Monday, when the purchasing manager indexes are announced. Economists currently expect the manufacturing gauge will remain mired in contraction territory, albeit with a slight improvement.

Global trade and investment has been weaker in the third quarter, and “with the combination of slowing global demand and subdued domestic demand, the downward pressure on China’s economy has been increasing significantly,” according to research note from the Bank of China’s Research Institute released Wednesday.

There’s a rising risk the quarterly growth rate will drop below 6%, according to the report, although the economy may stabilize in the fourth quarter to some extent due to the support from policy and the resumption of China-U.S. trade talks, according to Bank of China.

“The early indicators show more downward pressure on China’s economy in September,” according to Qian Wan, economist at Bloomberg Economics. The Asian bellweather of South Korean exports is flashing red, business surveys point to “broad-based weakness” for companies, especially smaller ones, and deflation is deepening, which will further stress industrial companies’ profits, she said.

Small business confidence declined in September after stabilizing last month, according to a survey by Standard Chartered Bank, which said the real-estate and property sectors were dragging down the overall result. Firms were more pessimistic in that survey, with the outlook declining.

Conditions reported by sales managers fell to the lowest level in more than six years last month, and continued at that level in September, according to London-based World Economics Ltd. “Chinese sales managers in the manufacturing sector are clearly worried about the current business climate and about future prospects,” according to the report, which noted that that “trade war may be beginning to bite hard on domestic and overseas Chinese business.”

Although Chinese and U.S. negotiators returned to the table this month and the U.S. postponed some tariffs, those trade tensions continued to weigh on China and nearby nations that supply goods to its factories. South Korean exports dropped the most since 2009 in the first 20 days in September. Exports to China were down almost 30%, the 11th straight month of falls and the worst since at least 2016.

The downbeat readings seen in Bloomberg’s collation of early indicators gels with a report by the China Beige Book released Wednesday that showed all sectors of the economy were struggling. The damage to manufacturing from slower growth in sales prices was the main cause of the weakness, although the decline in exports was also a factor, according to the report.