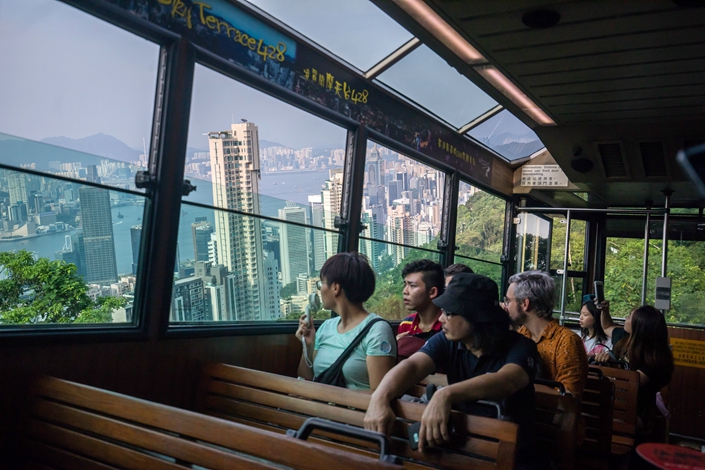 Passengers look towards the Hong Kong's skyline as they ride onboard the Peak Tram on Aug. 28, 2019. Photo: Bloomberg

(Bloomberg) — The first week of October — China’s national holiday break during which millions head out on vacation — marks one of the busiest periods for Hong Kong’s tourism and retail industry.

Chinese group tours for the Golden Week are set to plunge 86% compared to the same period last year, according to the city’s Travel Industry Council. Flight prices from Shanghai to Hong Kong are 38% cheaper than last year’s fares and only 30% of hotel rooms are booked for the holiday period.

Paranoid they could be targeted in the leaderless protests and wary after seeing footage of vandalized subway stations and flaming barricades, Chinese tourists — who swelled Hong Kong’s population by a fifth during last year’s Golden Week as 1.5 million visitors streamed in — are staying away this year. Losing its biggest source of tourist traffic will deal a body blow to the city’s already hurting industries.

It’s also a worrying sign for consumer brands and luxury retailers that rely on Hong Kong as a top destination for millions of mainland shoppers. It is the biggest export market for Swiss watches and the regional base for luxury giants like Kering SA and Prada SpA. Retail sales by value dropped 11.4% in July and are likely to plunge further.

Sam Lau, the owner of five hostels in the bustling shopping district of Tsim Sha Tsui in South Kowloon, has deployed two employees to approach passers-by, especially those with suitcases, and hawk rooms at negotiable rates.

“We have to accept the reality now,” Lau said. “I can’t see the future. I need to pay my employees,” he said.

In past years, his rooms have always been full of Chinese visitors during Golden Week, but only 40% of rooms are booked right now, and he worries that even those may not show up. He’s thinking of converting hostel rooms into apartments for long-term rental to pivot his business away from tourism.

Across the city, only around 30% of hotel rooms are booked a week before the start of Golden Week, compared to the usual 70%, said Yiu Si-wing, a Hong Kong lawmaker representing the tourism industry. He expects tourism arrivals to plunge 40% this Golden Week compared to the same period last year.

The National Day fireworks next week have been canceled citing public safety concerns along with a golf tournament later in the month.

The chill over this year’s Golden Week is also pressuring airlines. Even with carriers like Cathay Pacific Airways Ltd. reducing and re-routing flights after protesters disrupted airport operations last month, prices and bookings are down compared to Golden Week last year.

According to figures from Chinese travel portal Qunar.com, the price of a flight from Shanghai to Hong Kong has dropped nearly 38% for this year’s Golden Week compared to the same period last year, while the number of bookings has slipped by nearly 22%. For flights from Beijing, prices are unchanged, but bookings have plunged 46%.

“There has not been a single inquiry about traveling to Hong Kong in the past two months,” said Mingxin Li, manager of Shunyuan Holidays, a retail travel agency in Beijing. “It’s a huge blow to companies that rely heavily on Hong Kong tours.”

Fifteen tour groups are scheduled per day for this year’s Golden Week, a fraction of the 110 last year, according to the Travel Industry Council.

In the Chinese city of Hengqin, about two hours travel from Hong Kong, 40 tour guides sat in a lecture hall this week taking a three-day class to qualify for a tour guide license in mainland China. They are the lucky ones: 1,000 Hong Kong guides had applied for those 40 spots, said Alice Chan, Council’s executive director.

“There are 6,100 licensed tour guides in Hong Kong and many of them have no work now,” she said. “They have the time to go to Hengqin to take the course and then they get one more chance to work. You can see how desperate they are.”

Hengqin’s promised a 3,000 yuan ($421) cash incentive for Hong Kong or Macau guides who get a license in the district.

Hotel workers are also worried for their jobs. About 77% of people working in hotels have been asked to take unpaid leave of up to three days while about 43% believe hotels will cut jobs if the situation worsens, according to a survey of 438 Hong Kong hotel workers conducted at the end of August.

Macau, the world’s largest gambling hub, is emerging as an alternative to Hong Kong for tourists during Golden Week, said Stephen Lau, president of Power of the Macao Gaming Association, an organization that represents casino workers.

If the protests continue, the Macau government may start marketing campaigns to attract visitors from China, Europe and the U.S. directly, he said.

Some Chinese consumers are also looking for the opportunities in the crisis.

“Hong Kong has never been so affordable,” said Michelle Zhang, a finance executive based in Fuzhou who frequents the city for its luxury shops. She’s ready to seize a last-minute flight to the city if no major disruption erupts over the Golden Week. “Unlike previous years, there’s no need to scramble to book a room or an air ticket.”

Still, many have shelved their plans.

Xia Chen, a 50 year-old taxi driver in Rizhao, a city in China’s eastern Shandong province, was going to visit Hong Kong with her husband as they planned to be in neighboring Guangzhou for the holiday.

“We were worried about our safety and decided in the end to wait for a safer Hong Kong.”